This past weekend we drove down to Myrtle Beach to spend the weekend with Chuck’s brother, Pete, and his family. Stevie and Matt drove down with us making the weekend even better.

We spent most of Saturday at the beach. Tim absolutely loved being out in the waves. It was a red flag day at the beach so there were plenty of big waves. Stevie was in need of the extra vitamin C and spent the day with Chuck laying in the sun. Unlike Stevie, Chuck did not apply plenty of sunscreen and as a result was very sunburned. 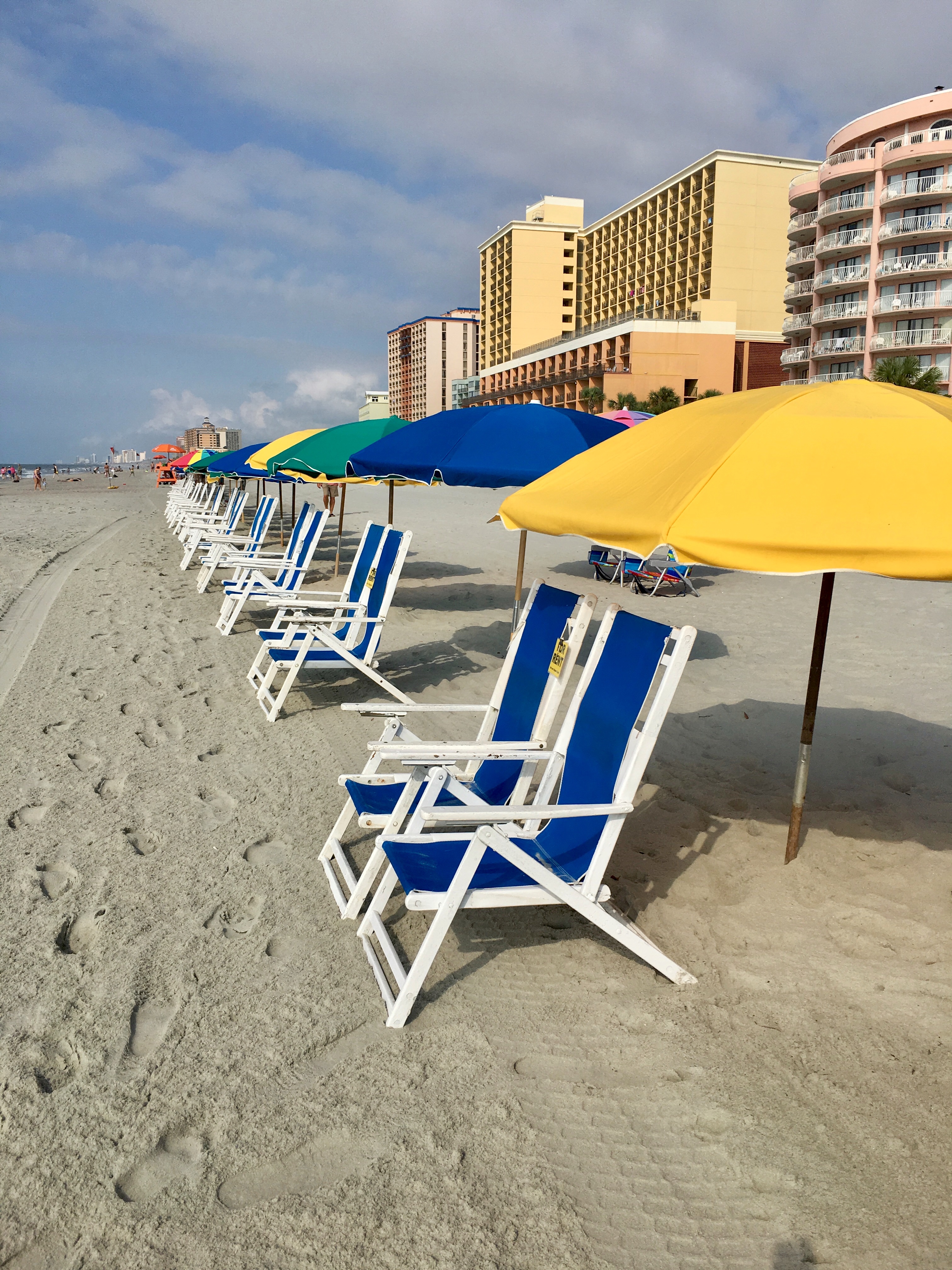 I, having a broken foot, spent the day hanging out in comfy chairs under an umbrella. Matt and I did a good job of distracting each other from our second choice books. He was reading something important and educational, I was reading a book loosely based on a series of real murders that happened many years ago on the Colonial Parkway right where I live. It’s not that the book isn’t good rather I’m way into the 5th book of the Outlander series and that is what I need to be reading. It’s on my Kindle and I didn’t want to risk sand exposure. 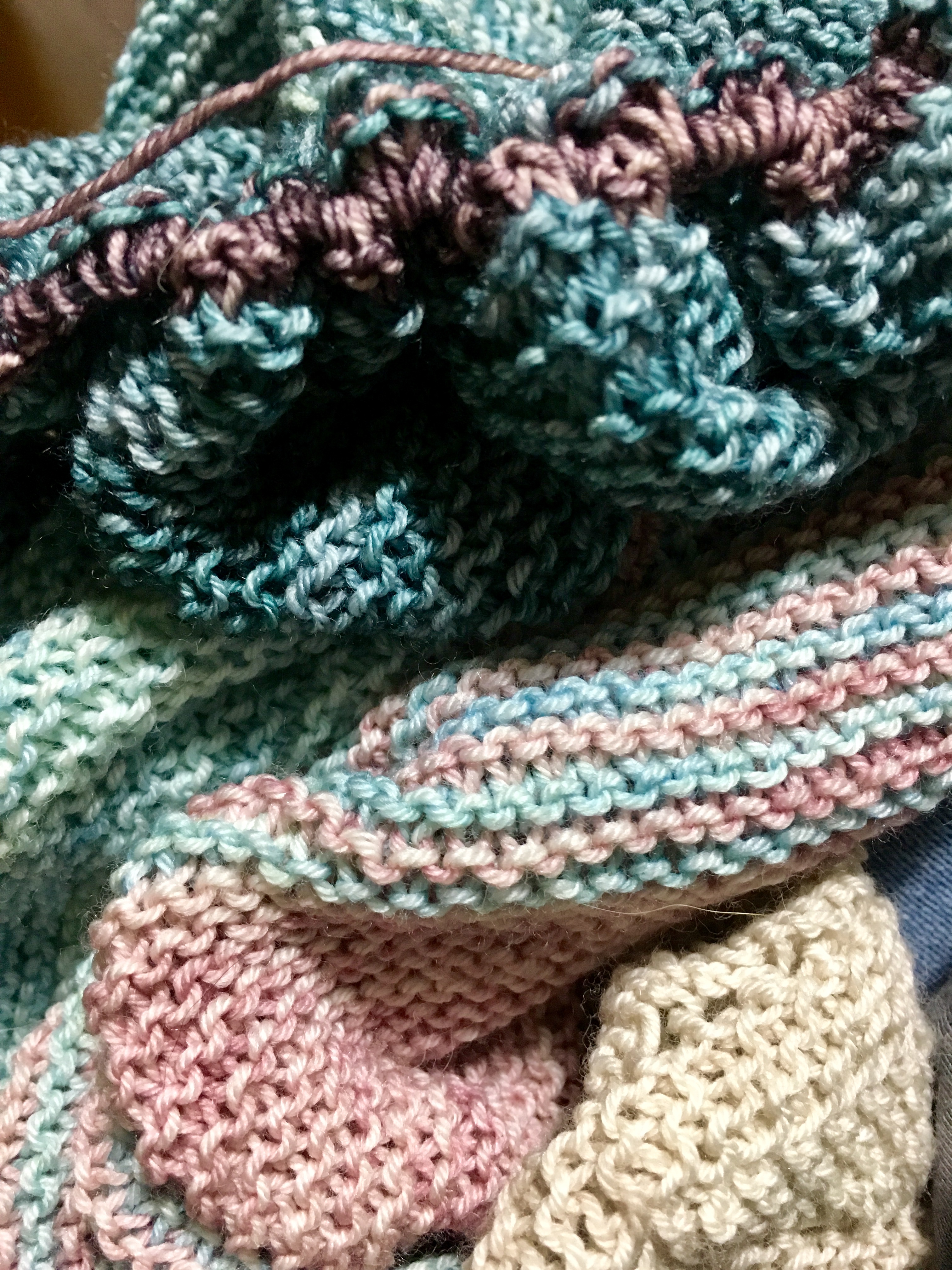 The drive to Myrtle Beach is about six hours and with Chuck driving I was able to power right through the dark blue on My Hydrangea Shawl. I am officially on the last color. Two more sections to go then the arduous task of an I-cord bind off.  The bind off will be more than 1500 stitches. It will take awhile. As incentive last week I picked out two more skeins of yarn to go with the 3rd find your fade shawl I started many months ago. I will start working earnestly on that once this shawl is done. 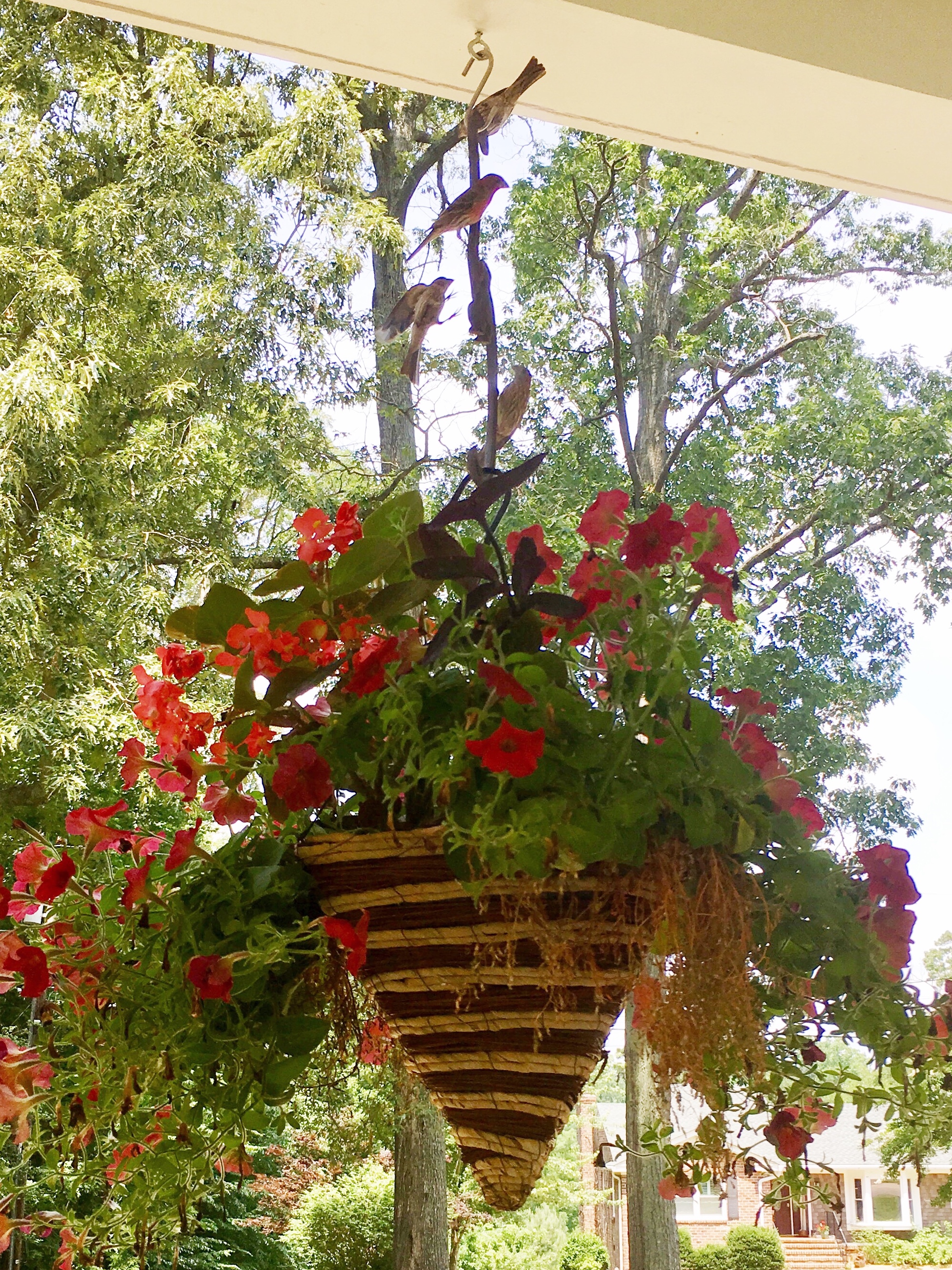 Let’s talk about Bird Watch 2018. I’m down to two nests. The 3rd hanging basket nest, that has House finches in it, is coming to a close. Yesterday I noticed all the little birds fluttering around but not completely moved out of the nest. There have been 4 babies testing their wings and at least one adult, maybe two, feeding the babies.  Today when I watered the plant all but one baby flew up into the tree.

The next bit is sad. I hesitate to even mention this one [because I don’t like it] but I think I need to say it so I can find peace.  Be advised it’s ugly.

Yesterday I saw the 4 House Finch babies looking for mom with food. They were mostly feathered and getting bigger by the day. A couple weeks behind the other babies in the hanging pot. I meant to go out and take a picture but got distracted and never did. This picture is from Friday before we headed to the beach.

With my foot being broken Chuck is doing a lot of the chores I usually do. This includes watering. We have beautiful pots full of petunias and marigolds and snapdragons. But they require lots of hand watering. Anyway……Last night after dinner Chuck was out watering, he watered the front pots, grabbed the box on the porch from Amazon and reached for the door handle. YIKES! There was a snake climbing up the door’s side windows! CLIMBING UP THE FRONT DOOR!!!! He regrouped his thoughts, took a picture and sent it to me. I’m not proud and therefore will tell you my reaction was probably too dramatic! As I called for “OFF with it’s HEAD!” Max calmly inspected it from inside the house while Chuck did the same from outside. Their goal was not to kill it, regardless of my opinion, but to identify it. They googled, looked it up in my Reptile Book and talked to others. 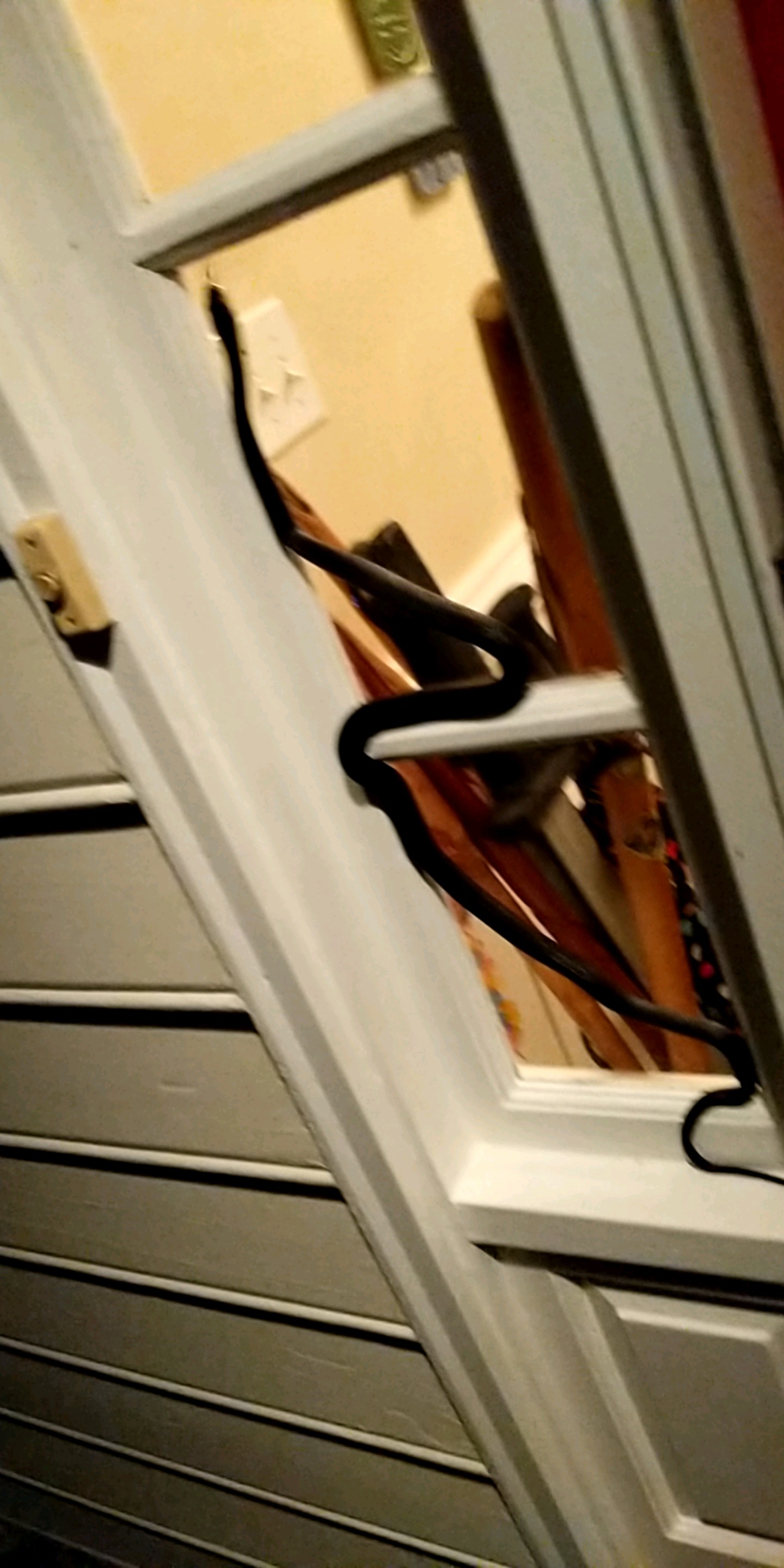 Chuck, Max, Stevie and Alvin (Chuck’s BBF) all agreed it was a Rat Snake and “They are a good snake to have around.” Max relocated the snake from the door to the yard. Knowing the snake would have a one track mind and a guaranteed meal waiting in plain sight this probably wouldn’t be enough to save my baby birds. Chuck did offer to move the wreath to a hanging hook. I didn’t think the nest wouldn’t withstand the move as most of its architecture was supported by the door so I said to leave it.

This morning I went out and checked. All the little babies are gone. No proof of what caused their disappearance. Maybe it was fairies that took the birds to go live in a charming glen somewhere. But most likely it was a Rat Snake. Should I have let Chuck risk the nest falling apart to move it? Perhaps. Should I have put the babies into a box and fed them myself with smashed chicken feed until they were strong enough to fly off? Perhaps. But neither of things things happened. And I’m sure the Rat Snake is very satisfied with his evenings result.

Mean while I am contemplating why I moved to a place that not only has Rattle snakes but also Cotton Mouth snakes just to name a few.  We’ve already had ticks on the dogs and myself and Chuck seems to be popular with the Chiggers. I never felt as in danger living in the desert as I do now in Virginia……..

I think I’ll stay inside and knit.

One thought on “Yikes!”