My brother, Andy, and his wife, Katie, have two children. Anthony and Sam. 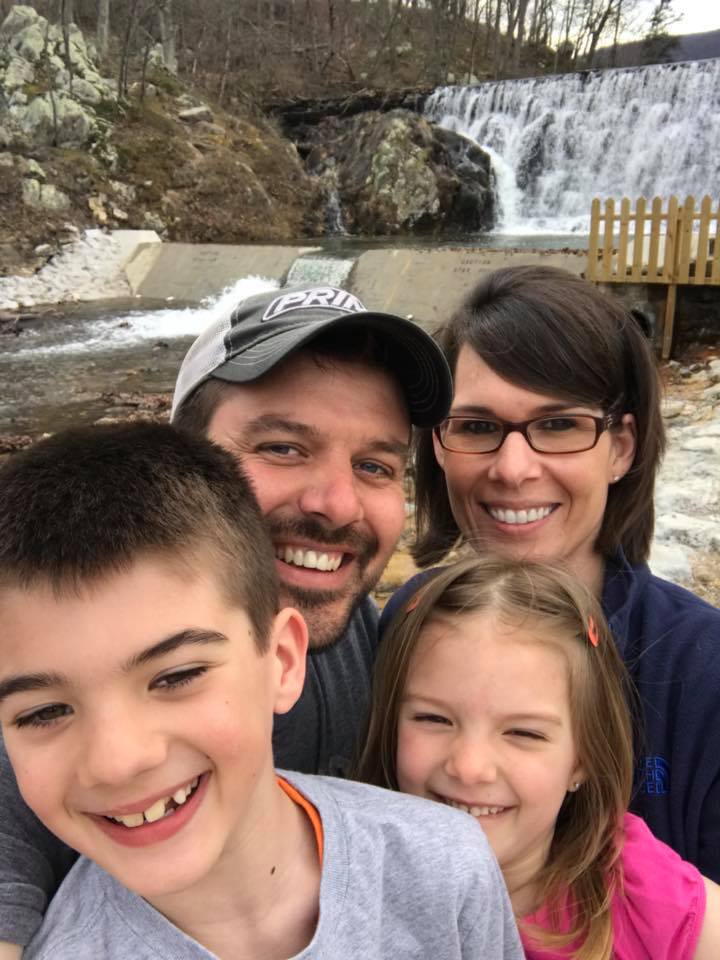 They all arrived on Monday. Chuck had taken off from work the whole week. So it was like a big vacation for us, I guess really a stay-cation. Katie had wanted to take the kids to the ocean so we purposefully waited ourselves to do that with them. Tuesday we loaded up the van headed headed to the Atlantic Ocean, Virgina Beach specifically.  Being April the water was really cold but that didn’t stop us!

Anthony had brought the metal detector he had so he could comb the beach looking for treasures.  With a little discreet help from uncle Chuck both kids made out with a few dollars worth of change. Not too bad. Anthony is totally a “Ferdinand” and could probably spend all his days looking at the small details and beauty life has to offer, he’s so sweet. Sam… Sam is a very determined to be the best at everything, and she “already knows that” and isn’t shy to point it out. She was totally intrigued by the bigger kids at the beach trying to climb to the top of the climbing ropes. She jumped right in, and kept at it, until she made it to the tip top! It was pretty impressive watching her. 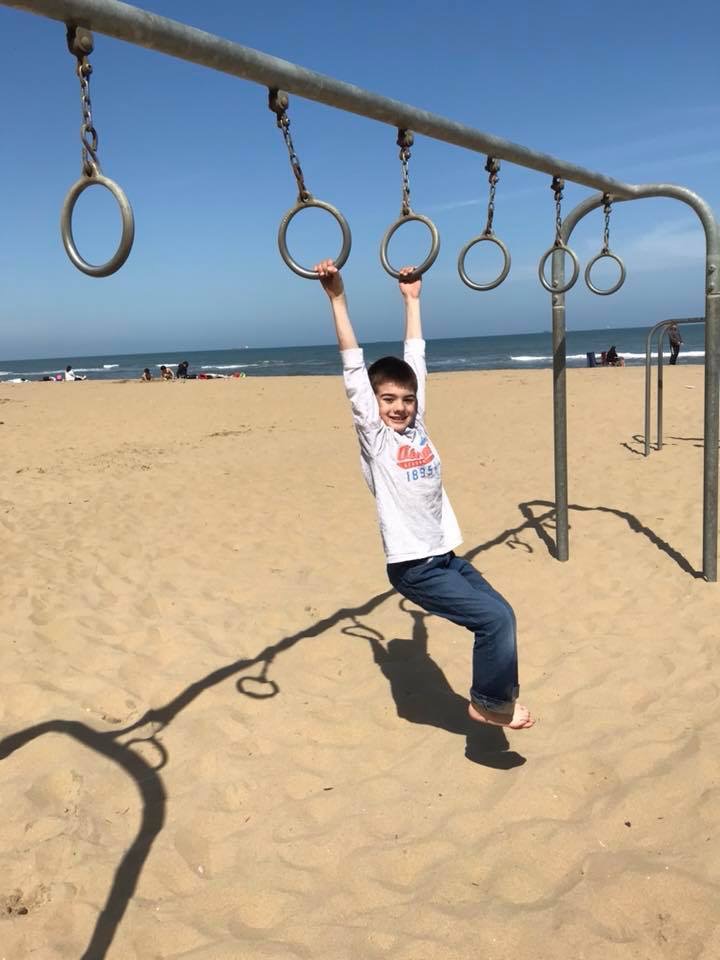 It was pretty fun down at the beach. The playground was popular with the kids. Even though it was spring break the beach wasn’t very busy. I can’t imagine going there during peak time. It must be a zoo! This way it felt like our own personal beach.

Continuing on in our stay-cation we took the kids to Jamestown settlement. I like Jamestown because it’s interactive. With an Indian village, Ships, and Fort it offers a rich history experience while out in the fresh air. 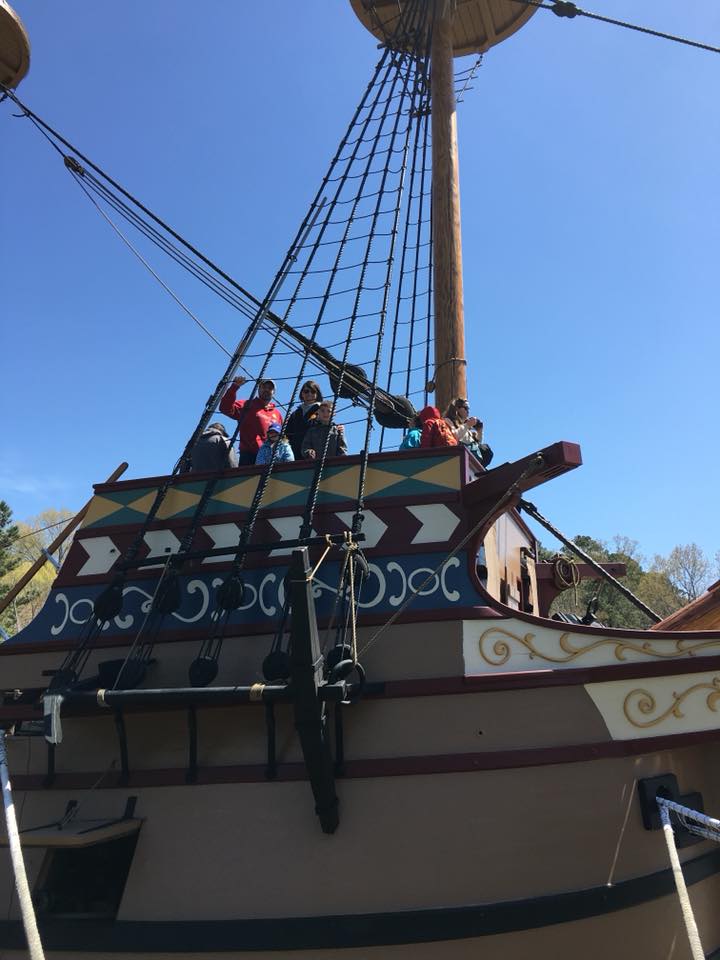 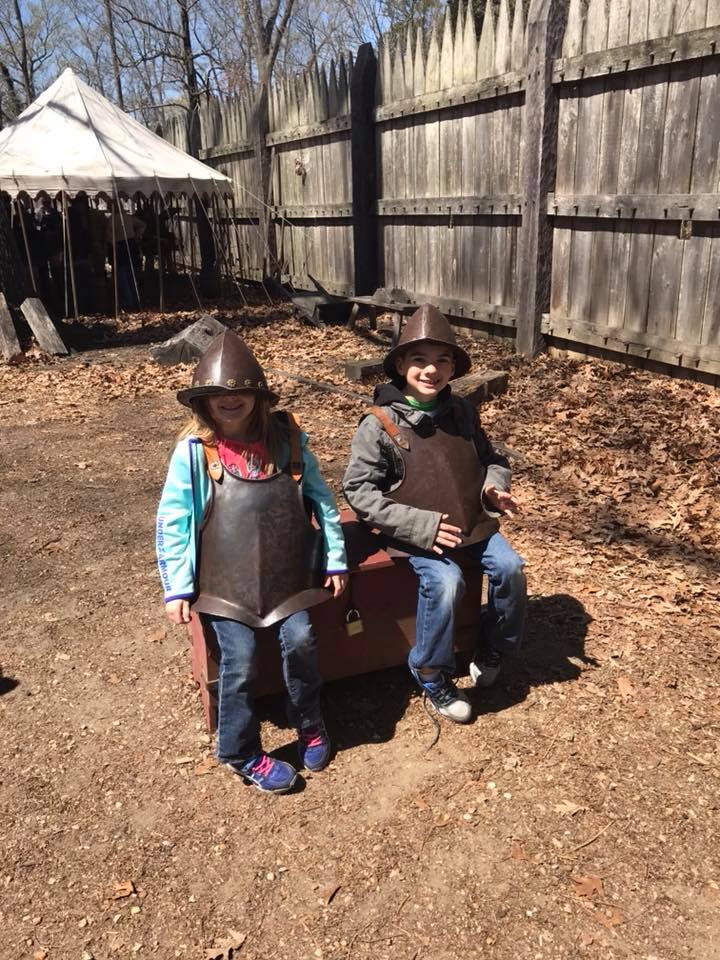 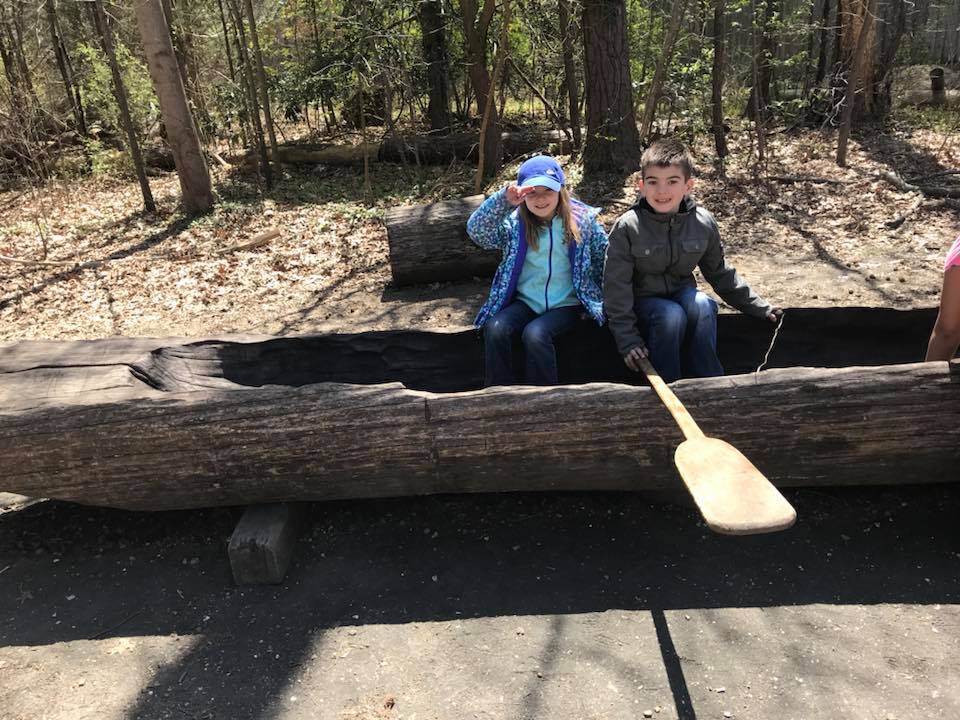 Since we were on kid time we skipped the inside museum and movies but those are worthwhile if you get a chance. We also were able to watch glass blowers at work, Anthony was really interested in that. And, frankly, so was I. Jamestown Settlement  tells all about life in the 17th century when the British were arriving to this area with the Virginia Company.

The next day we headed over to what in my opinion is the star of the historic triangle area, Colonial Williamsburg. This is a living history village that is focused around the birth of country. There are recreated and preserved buildings and places that were there in the 18th century. Places where our founding fathers met, where important discussions took place. and where the actual writing of the Declaration of Independence happened.  It’s pretty amazing to be able to experience this through the costumed interpreters. There are also actors all around portraying very real people. The day we were there we saw General Washington riding his horse through the Palace Greens! 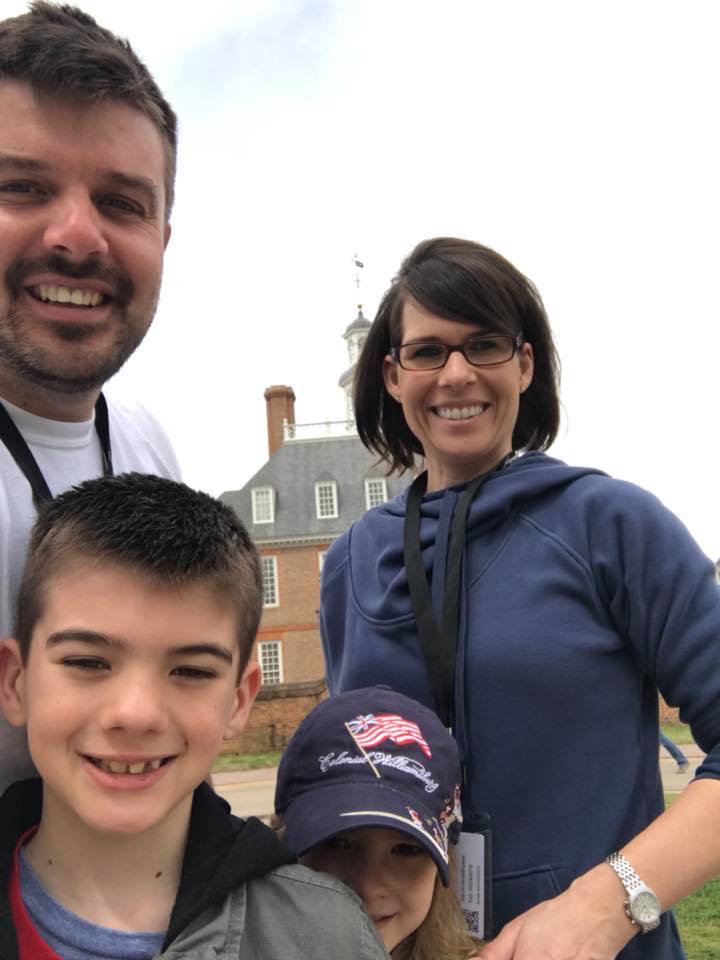 It was a perfect weather day. Until, exactly as the Weather Channel predicted, at about 1:40pm there were brief, heavy showers.  We found shelter in one of the stores. It only lasted about 15 minutes.  Then the kids went on with Katie and my mom to the children’s interactive area where they were able to play period games and see children in period costumes going about their daily chores. 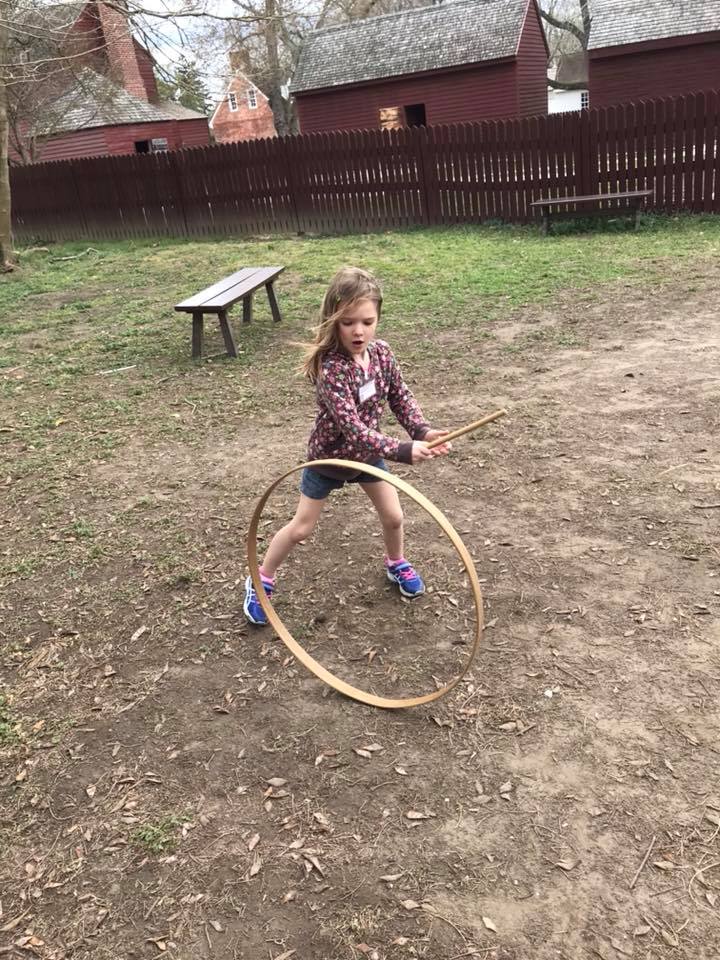 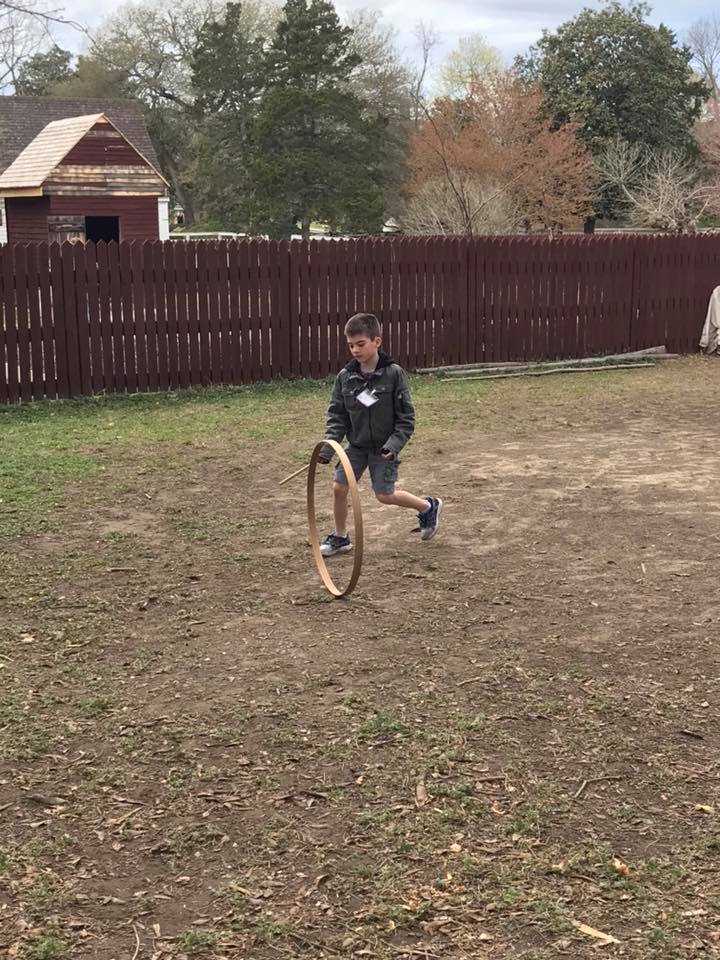 They liked this game the best. Anthony picked it up immediately. Sam took a little longer, but she doesn’t give up easily.

Chuck, Tim, Andy and myself headed off to explore elsewhere. I was really thrilled to share the Joinery with brother. He is a joiner, or as he would be called in today’s words, a finished carpenter. It was nice to see it through his eyes and here him talk about the tools and stuff.

It was a fast, short time with them. I hope they come back soon. We still have to hit up Yorktown! It was really nice to get this time with everyone, especially since my mom was here. too.

I hope you go out and explore the cool places you live near. Have you ever been to Colonial Williamsburg? If so tell me what you like the best, if not come visit us and we will go again with you!

This was a great short trip to Arizona. My mom is here with us for the winter and she has a wish to see every National Park in the US. We also thought it would be fun to play tourist so on Friday we stopped off in Tombstone. We went on Dr. Jay’s walking tour. It was fantastic. Dr. Jay was dressed in period clothing and walked us literally and figuratively through the town telling us what life was like and how the shoot out with the Earp brothers and Doc Holiday really went down. The pre-Hollywood version.  It was a really great day. 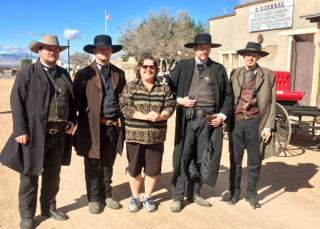 Mom with the Earp Brothers and Doc Holiday

We finished up our evening relaxing in our hotel watching a movie together. We watched August Rush (Tim’s choice) and Ciraline (Hanna’s choice) while we ate an easy dinner of sandwiches.
Saturday we added a new National Park to mom’s checked list. We went to the Saguaro National Park (West). The weather was perfect, about 70 degrees. 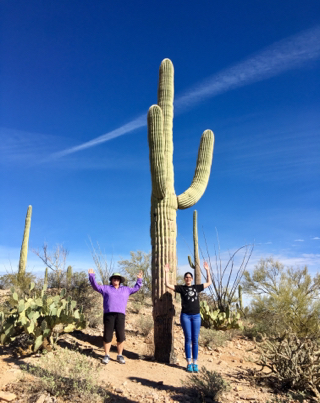 We were all impressed with the unique cacti, the Saguaro, only found in southwest Arizona and into Mexico. The cacti are found in exclusively in the Sonoran Desert.

We hiked and explored a bit. We really enjoyed being outdoors. 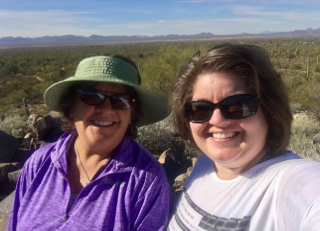 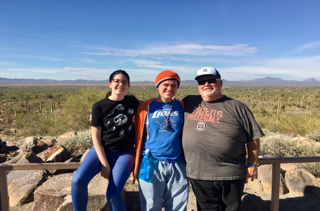 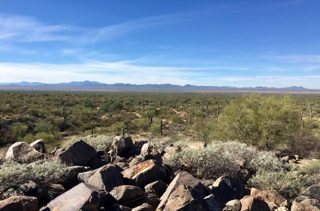 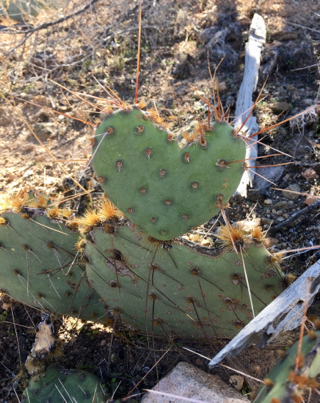 After we left the park we stopped at the Dessert Museum.  This was great, too.  We spent a good 3 hours here.  And easily could’ve spent the day there. It’s a botanical garden and a zoo. It very much focused on the desert life. Everyone’s favorite thing here was the Raptor show.  It was well done, we saw a few different hawk varieties and an owl.  They were trained to impress us with their natural skills and flew very close, as if we weren’t even there, you could feel the wind of their wings more than once.  We learned they were rescued birds from various life altering events, in one case a nest was left abandoned when the mother bird flew into an electric fence.  These baby birds would have starved to death without help.
To round out the weekend we did a little shopping on Sunday.  My daughter wanted to go to Lush, where she grabbed some bath bombs and lotion bars. My husband snagged a Arizona State shirt. I went to Papyrus and Michael’s.  We don’t have great shopping here in Las Cruces and we love to stop at some of our most missed shops when we travel.  I have a few things I’m really excited about.  I’ll photo those and get the info up here, too.