I’ve worked rather diligently on my knitting. trying to get in at least 3-4 hours of knitting a day. Which has produced a lot of yardage  of yarn turned into stitches.

Here’s where I’m at-

The actual updates. First off, I changed the Jaywalker Socks into Wrist warmers. I liked the striping so much.  I kept envisioning these under some long sleeves, just peeking out. I love a good I-cord bind off so I decided to finish with that. These are so good. I really want to make a few more pairs. I think the youngest daughter will nee some as she’s always cold. 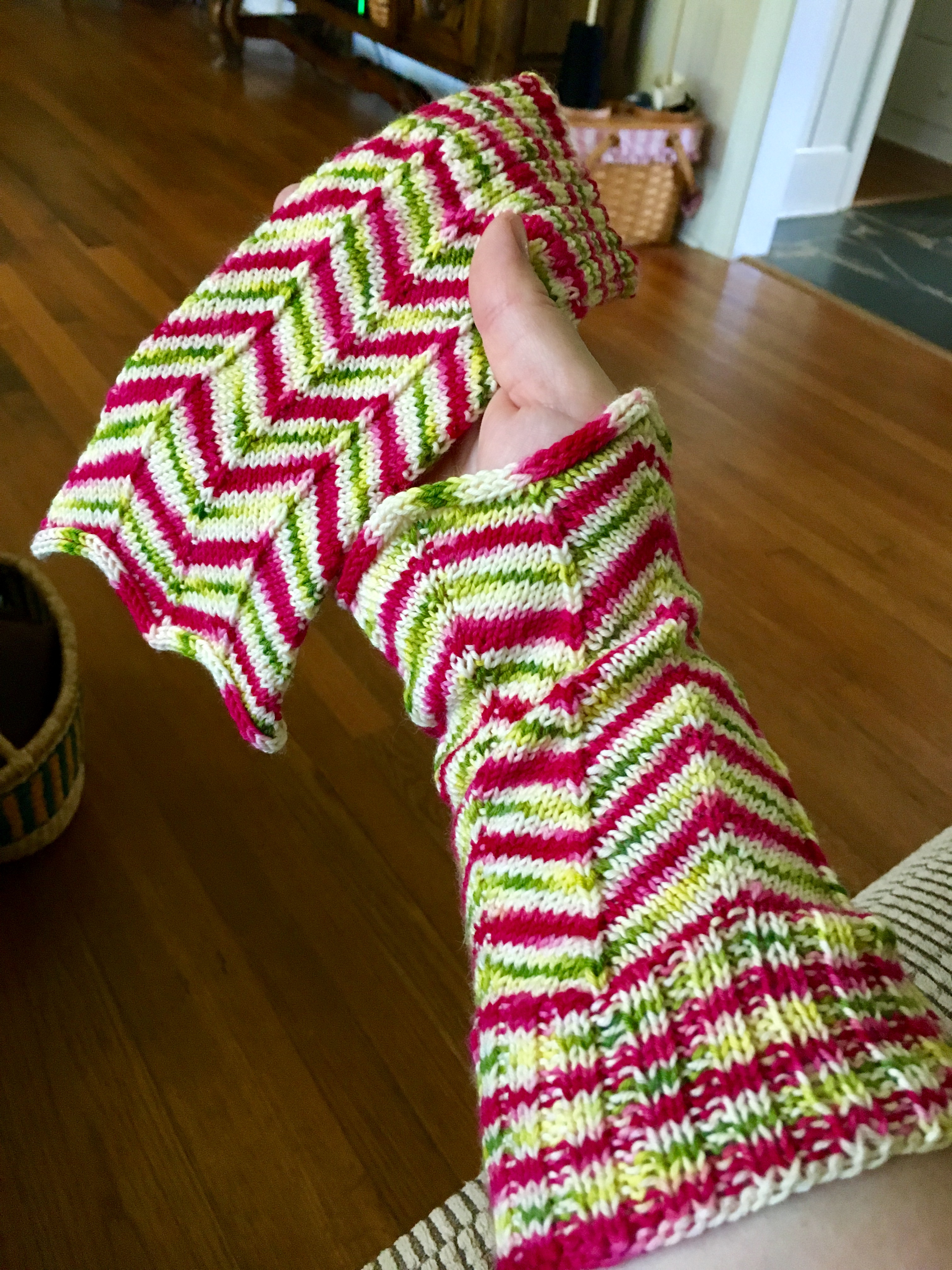 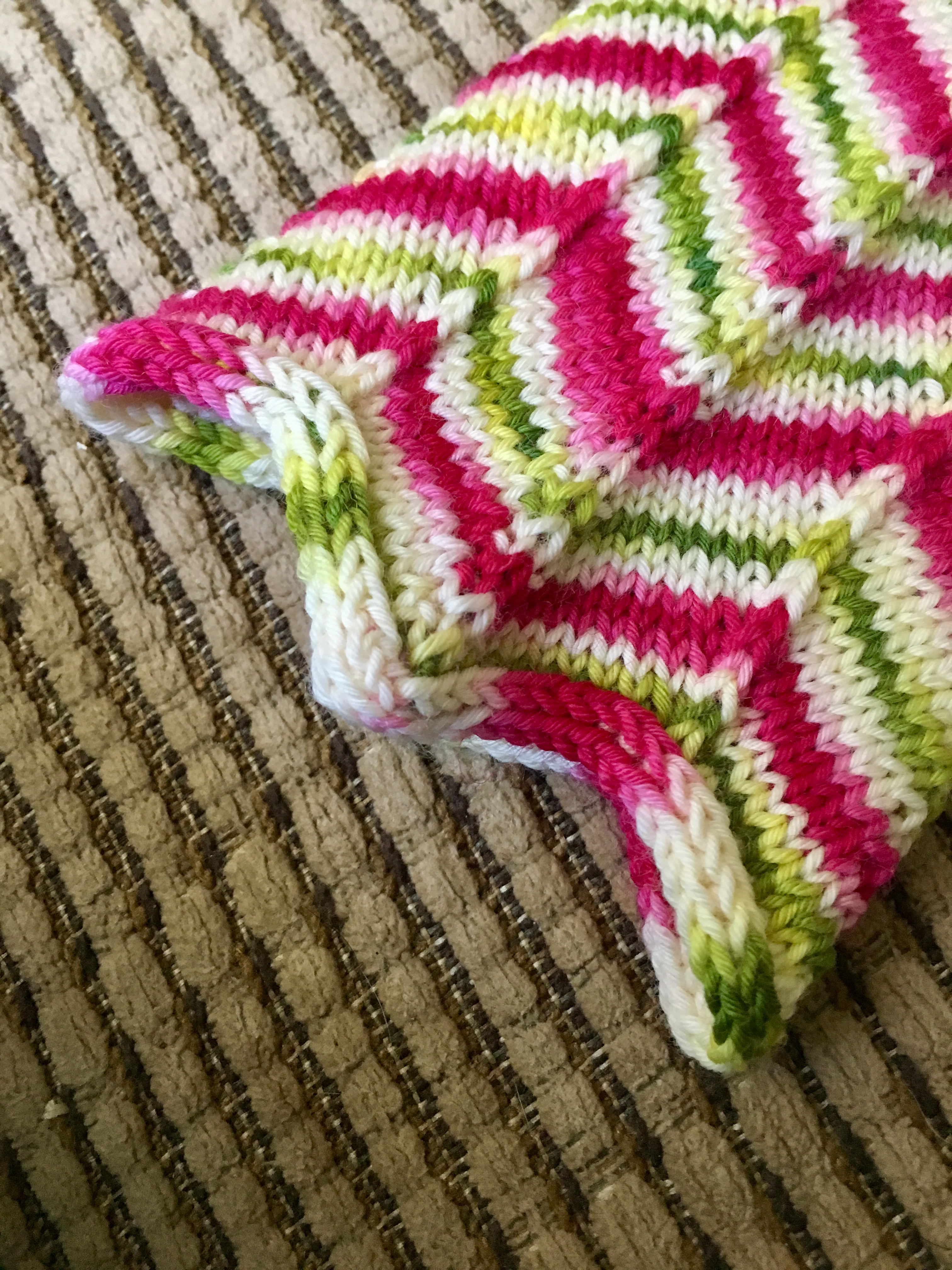 The I-cord bind off required some extra thinking and details. I cast on 3 stitches using the Backwards E-Cast On, the K2, k2togTBL and slid stitches back to left hand needle. continuing in this way until I came to the increases of the Jaywalker pattern. Where the points are I needed to ensure they had enough give so that the point would stay pronounced. At the point -between the double decreases- I added a single I-cord row with a K3 instead of the K2, K2togTBL. I then continued the K2, K2togTBL to the last row. Here was tricky bit, and I don’t know how to properly explain what I did, so bear with me. I worked a Kitchener Stitch on the live stitches and on the cast on stitches I wove the needle around the legs of each cast on. Clear as mud, right? Well, anyway. This finishing did two things. 1-It gave me a clean I-cord that looked continuous 2- Added the one extra row that the other double decreases have.  I think you legitimately cannot see where the beginning and end meet.  I’m so in love. Did I already mention that?

As knitter’s oft do. I cast on a new project, because I had a finished one. And I blame my dear friend Peggy. She told me about the pattern you see. It’s one of four patterns in a socks series based on Willy Wonka. I know, right? You see why I had to. The pattern I’m working on is the first release in this set. It’s called Candyman and I’m using the left over yarn from the Jaywalker Wristwarmers and some black yarn, both of these are Wollmeise. 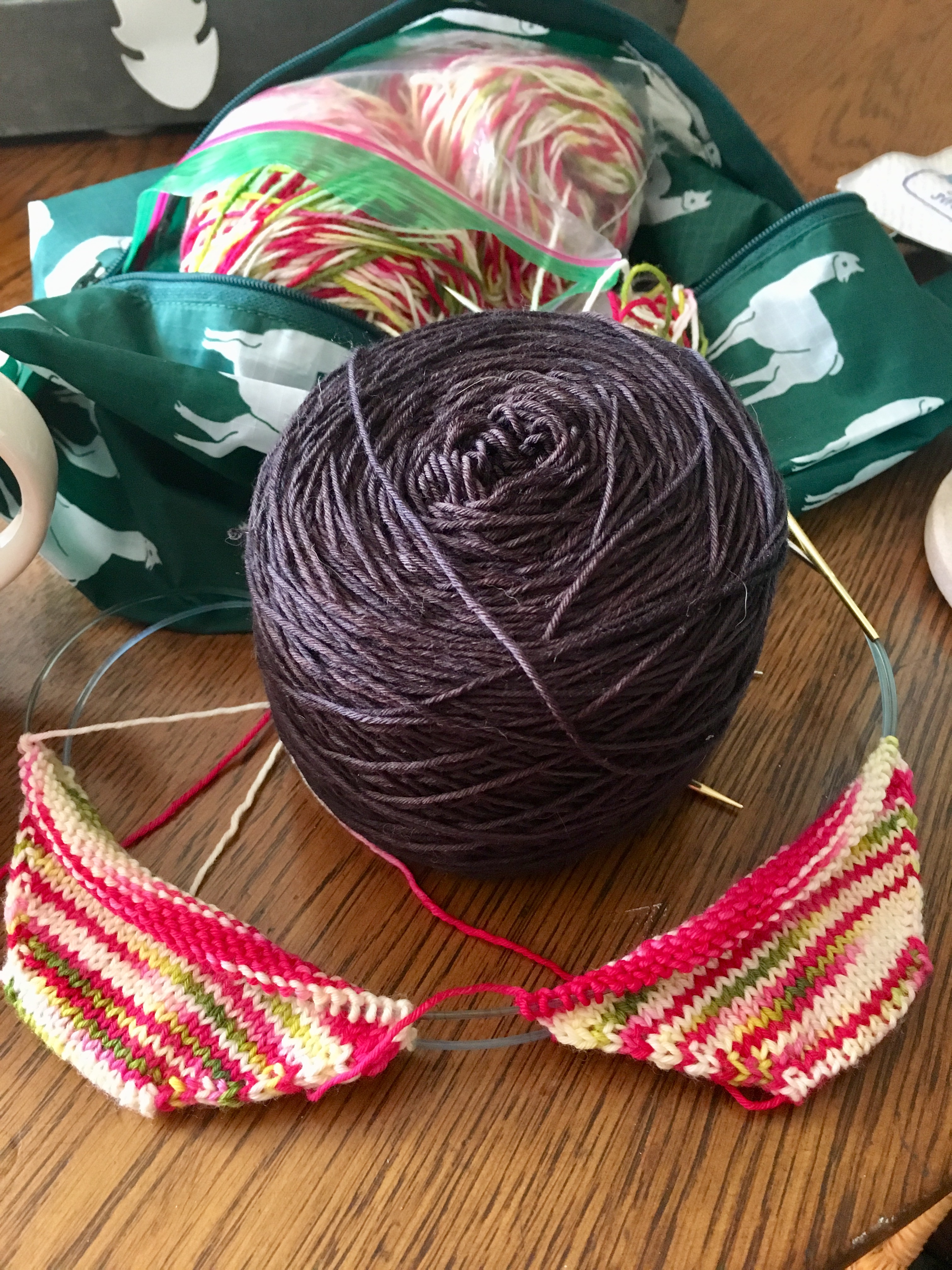 This pattern uses Judy’s Magic Cast On, which will forever remind my of Carol. We spent so many hours working on this cast on together. She is very dear to me. Carol moved from New Mexico to Colorado not long after I moved to Virginia. I will be able to see here next summer when we go to Colorado for Chuck’s niece Beth’s wedding. Luckily for me she is getting married very near to where Carol now lives.

I think I’m ready to cast off the Magic Stripes Scarf. It’s a good length for a tuck just inside you coat scarf. I probably have enough yarn to knit a second one or I could double the length. I’m thinking it’s the right length right now but I’ve put it on hold to give some time to confirm my thoughts.

On the Find Your Fade I have to finish the lace section on color 6 and then there like 32 rows or so of the 7th color and then the bind off. Pretty close to the end on that.

All in all, I’ve made pretty satisfactory progress. Now to not get distracted my those new socks.

I haven’t said anything about the wand sheaths I made. Yes, I did say “wand sheath.” Yes, I and most of my family have magic wands. Doesn’t everyone. These are very special magic wands that my brother, Andy, makes.  I made the sheaths based on an item by Alice Starmore from her book Glamourie. It was designed as a needle case but it is everything a wand sheath should be.

I ran some experiments. and realized quickly the 133 stitches she starts with are way too many.  After my experiments I found 65 stitches is correct for the wands. I used yarn I spun myself. I also added a flap to the back (that I had sewn down after felting) to create a loop for a belt to go through. I’m quite pleased with these.

I made mine from undyed, natural colored wool and used some of my precious  Wensleydale Lockes, also undyed.   I made a talisman pouch as well. These should suit the Witch aesthetic I’m going for in my forever Halloween costume. 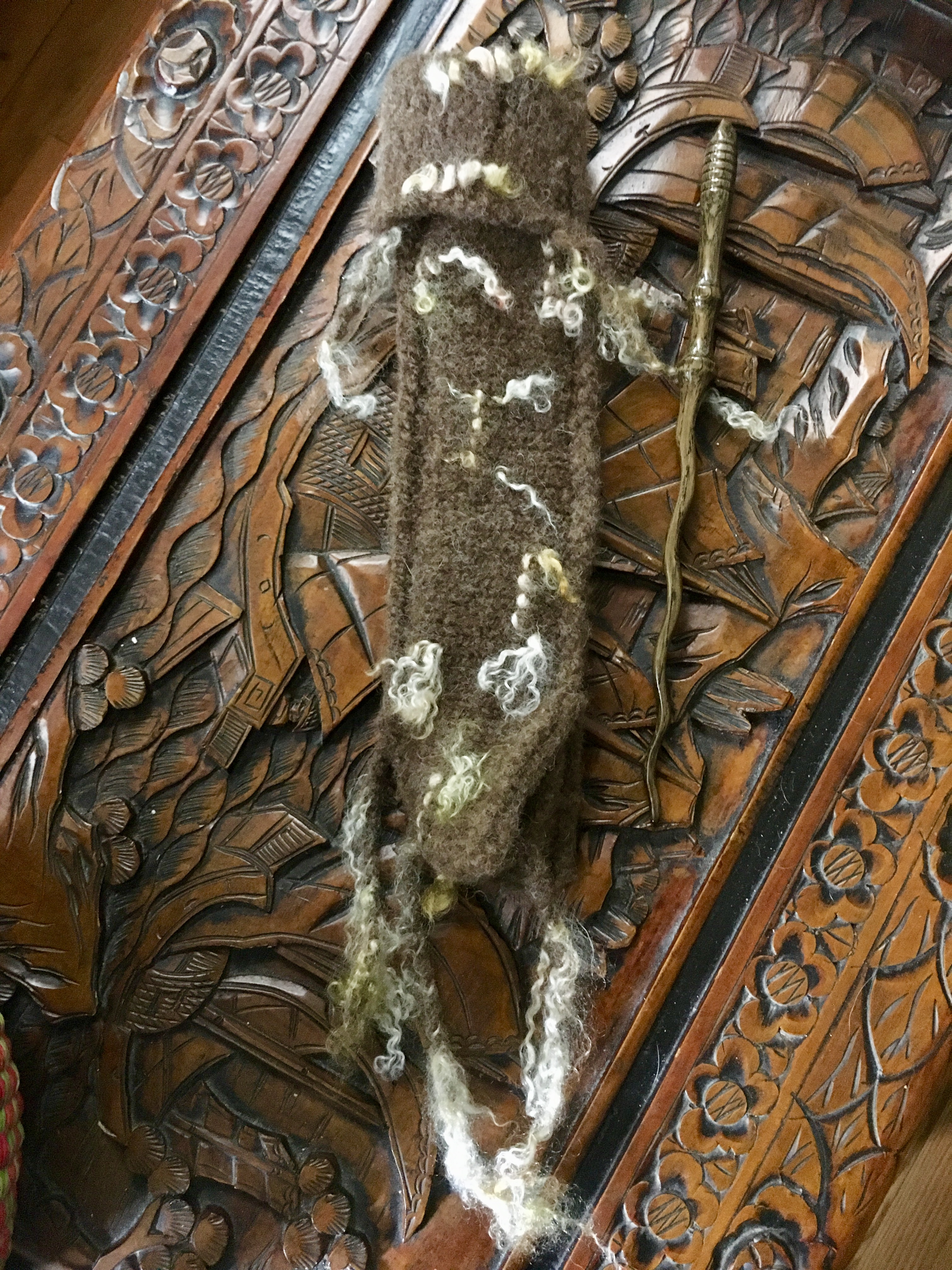 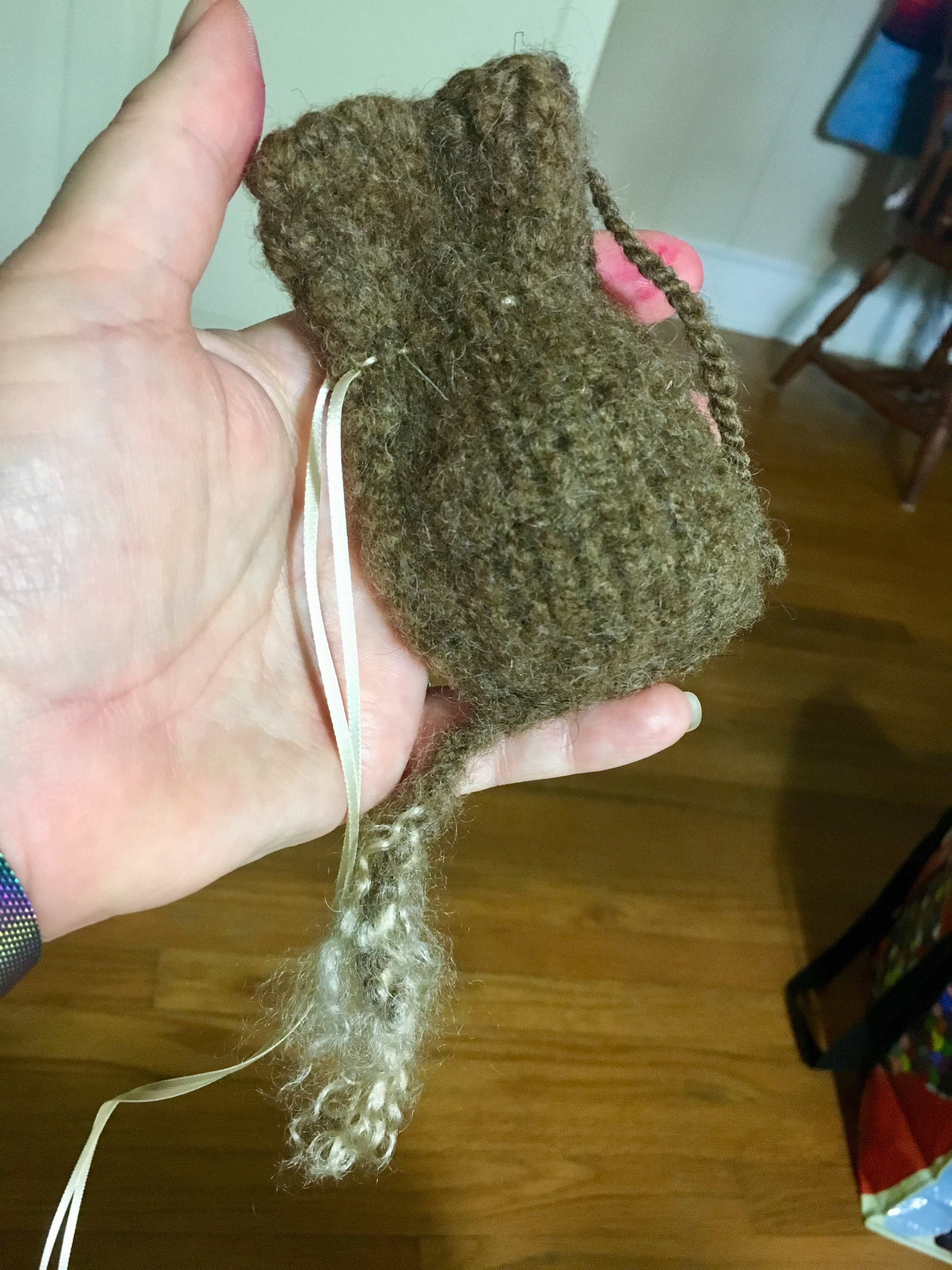 I also made one for both my nephew and niece. I made theirs with them specifically in mind. Thinking My nephew’s would have caterpillars as he enjoys making friends with the real thing. And my niece’s would have unicorn hair, be cause it’s unicorn hair.

If I do say so, and I do, they turned out quite magical. They were gifted with some rather fun gift wrapping as well. 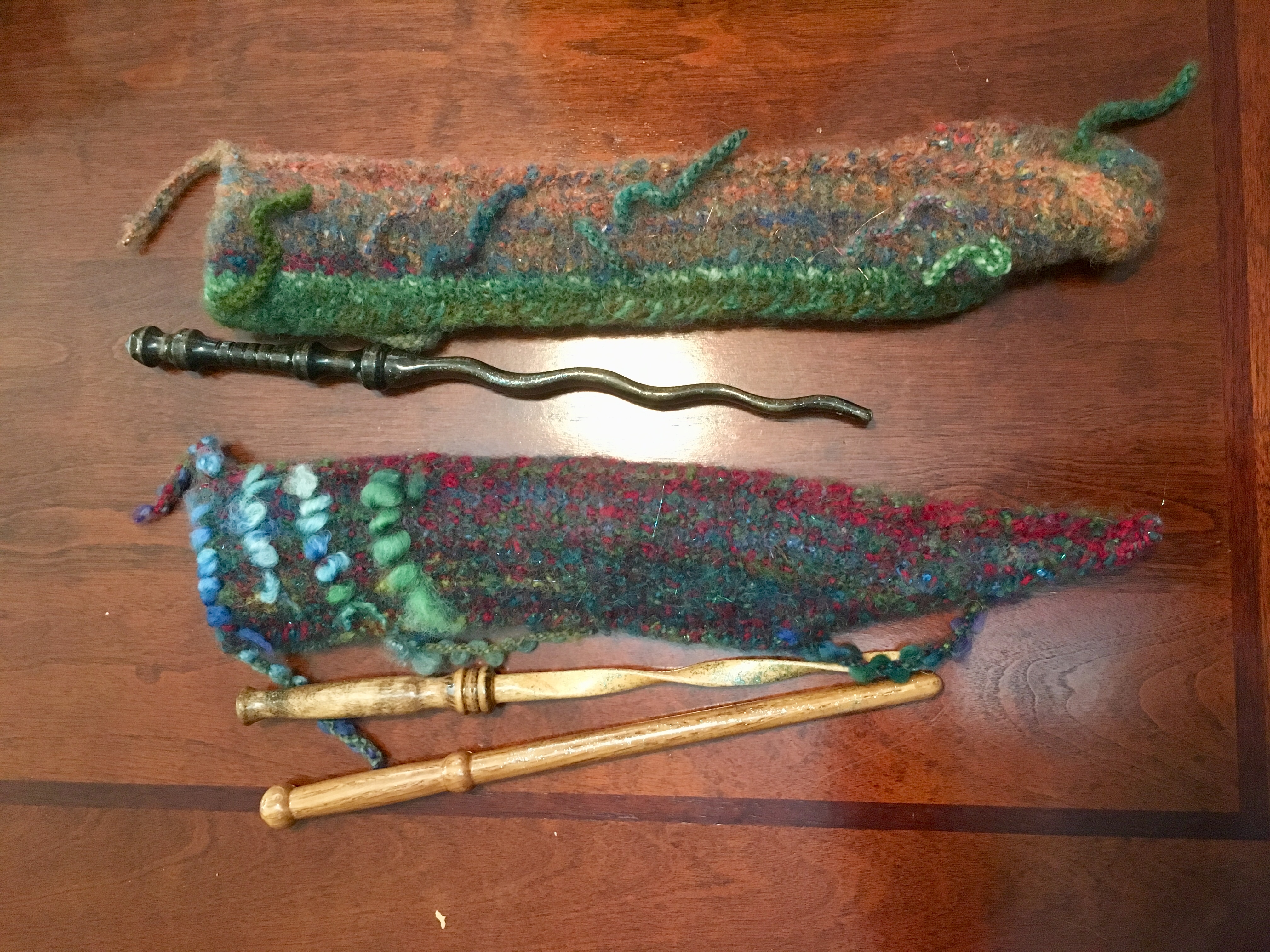 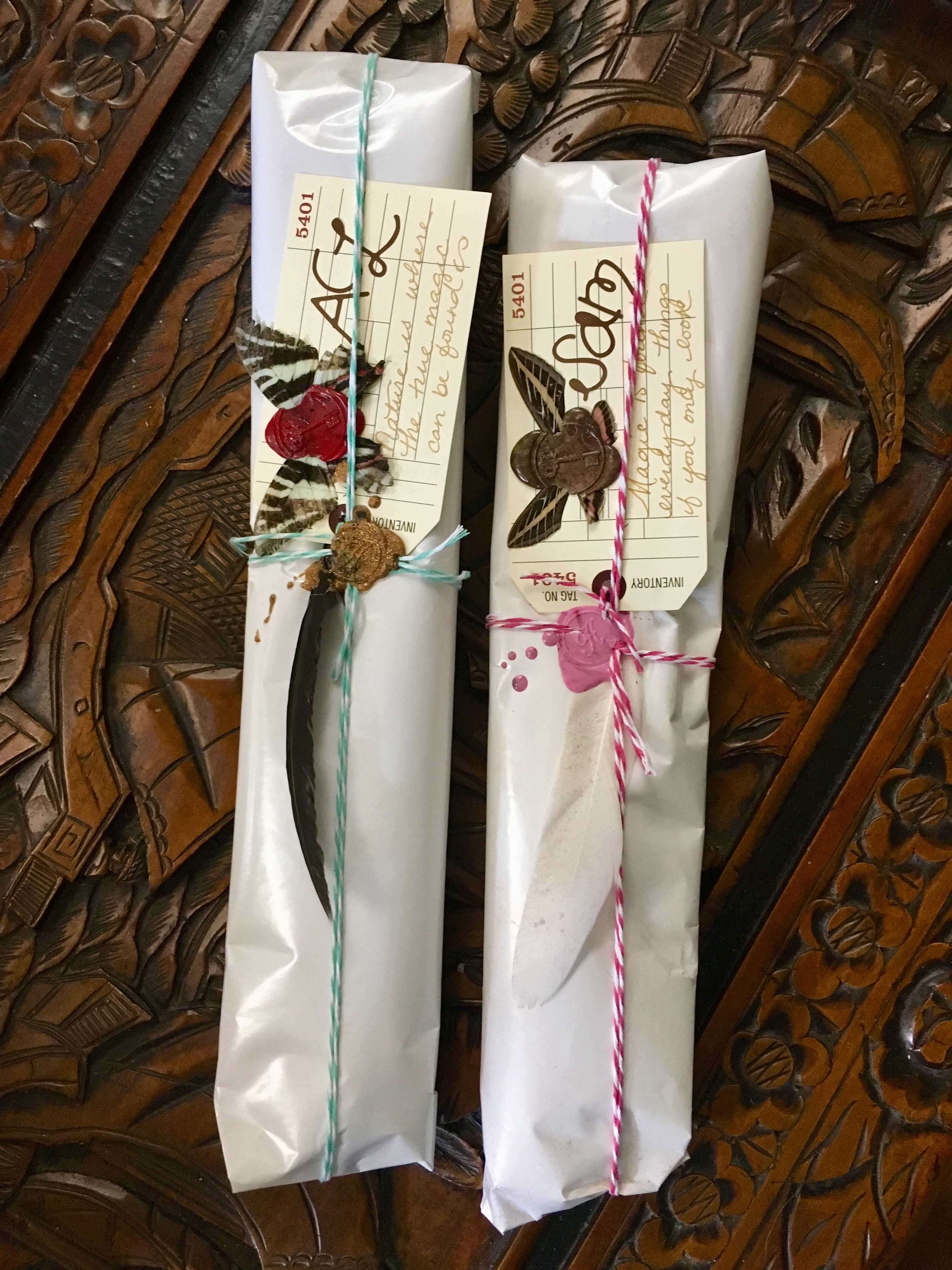 The wand sheaths were very fun to create. I should’ve taken notes, but was rather lazy about it and my memory isn’t as good as I would like, especially since I made these in July. But…They were happy.  I was happy. We all are happy.

Now, if I can just find where I put that darn witch hat!

l’ll leave you with a cute pic of some chickens.  Happy knitting! 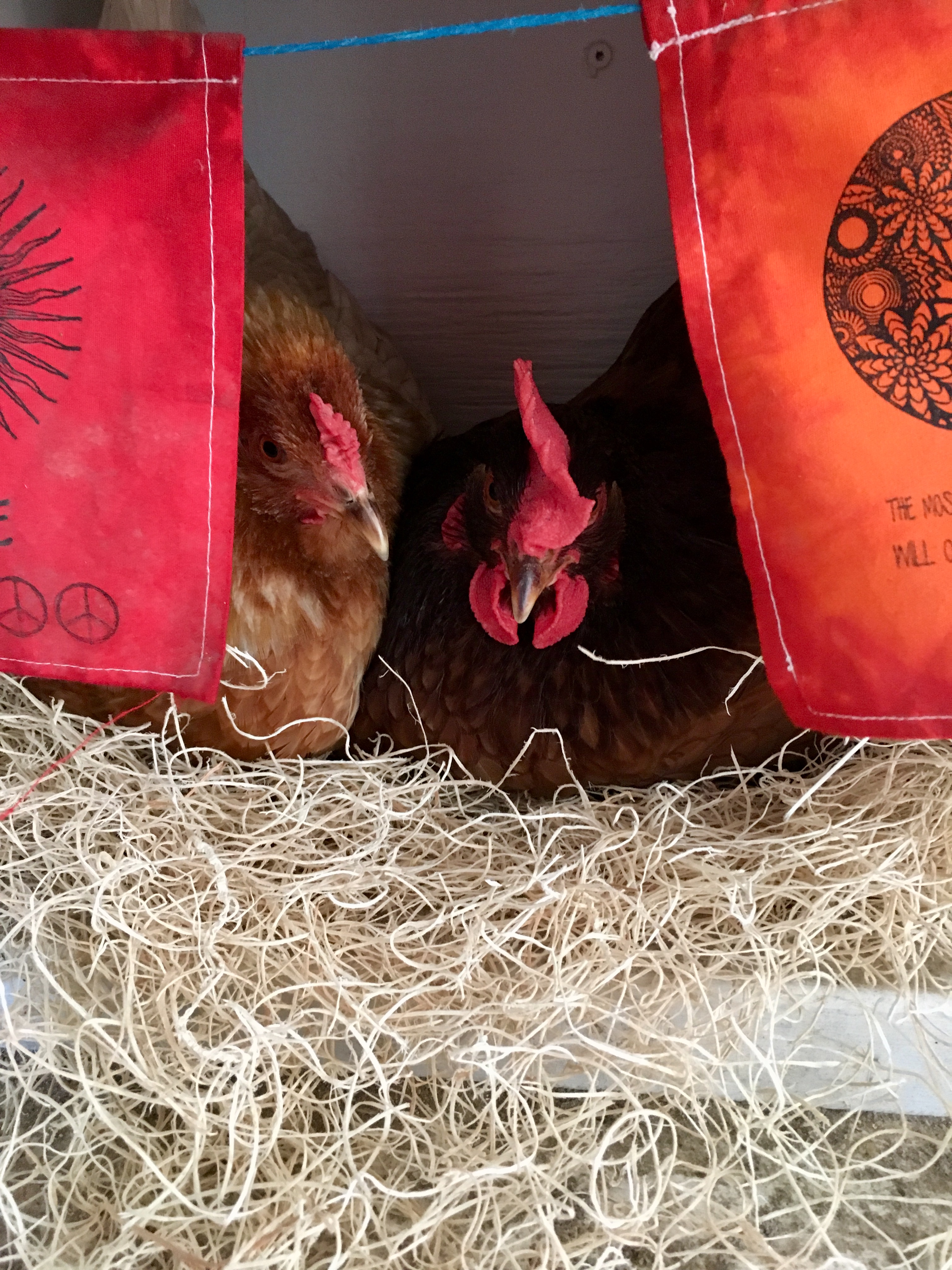 One thought on “Scarves and the Long and Short of Things”