Around here there seems to be an abundance of yard work. Having an acre of land can be rather daunting. Especially having spent the last 8 years in the desert. Though we made plenty of garden space with raised beds and lots of flower pots we did have rocks instead of grass. Not cutting grass for so long has significantly skewed my perspective on the amount of time it takes for this task.

I told Max, whose responsibility it is to weed whack, that it would take me around an hour to cut the front yard. Here’s where my skewing comes in. It took me about three hours in reality! And mind you I have a riding lawnmower. Previously, Chuck or Max have taken turns at doing this job. I was relegated to this task as it’s currently one of the few I’m “allowed” to do.

What do I mean “allowed?” Well, apparently, I’ve broken my foot bones in three places. I wasn’t even aware I broke anything.  I knew it hurt, particularly when walking on uneven ground or up and down hills and such. Some days it really hurt and others it wasn’t noticeable.

Until one day at Tim’s therapy, where I was sitting waiting for him, I dropped my kindle. I leaned forward to pick it up and I guess I put weight on my foot just right and had such a sharp pain for a second I thought I might pass out! I definitely saw stars. I set up a Podiatrist appointment that day.

After seeing the dr, and getting X-rays, it was clear I had two very significant fractures in the bone second from the left with a hairline crack in another. It was concluded that between the pain meds I’m on for Fibromyalgia and not having any initial swelling or bruising I didn’t realize it had happened.  [It’s most likely happened when I stepped wrong on a tree root raised above the ground. Probably the very one I asked Chuck to cut off that was by the chicken coop, since I always was tripping on it.] The powers that be must have decided to give me a wake up call. Saving the bones from actually breaking off by the continued stress of walking on them and therefore preventing the need for a surgery.

So, now I have a ugly, heavy, hot, robotic-like boot I have to wear for at least 6 weeks. And orders to stay off my foot whenever possible. Which as it turns out has been a real challenge for me, I’m not a very good patient.

But it is not so bad if I look at it from the point of how much time this leaves for knitting. And Chuck, being a great support, is doing a lot of the work I usually do and both boys are helping out, too.

And I have been doing lots of knitting. With each row I knit on my shawl I gain more and more stitches. Thus, each row requires more and more time to knit. I think that I’m winning. I’ve been powering through the Hydrangea Shawl like a beast. I’m now fully into color 4 of 5. While my shawl is clearly getting more blue as I switch through the colors I think my Hydrangeas are also getting bluer with the addition of fertilizer and the rusty things I’ve added around it. (Plus I’m saving all the coffee grounds in order to spread around the roots on my SIL, Carolyn’s, recommendation.) 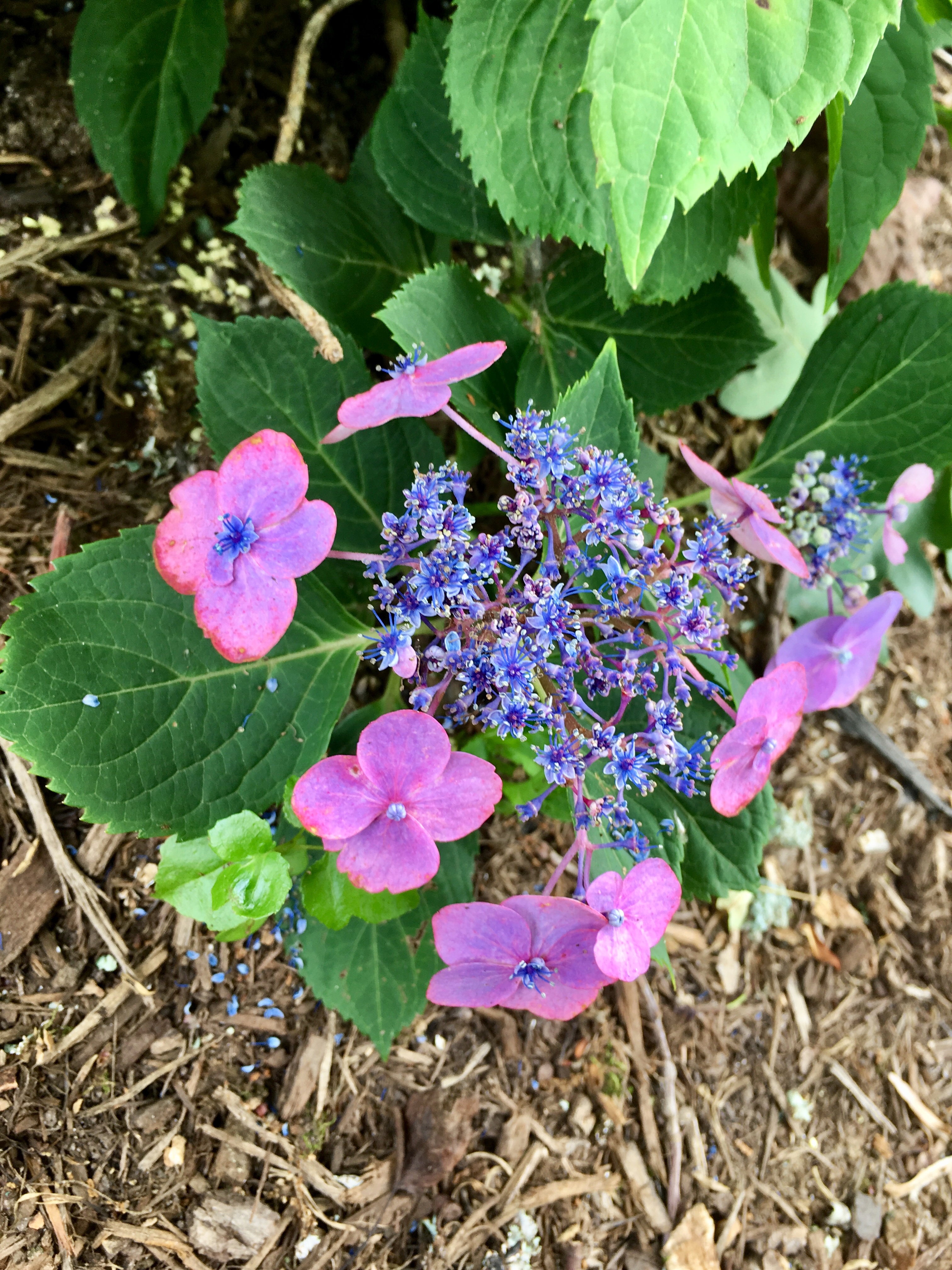 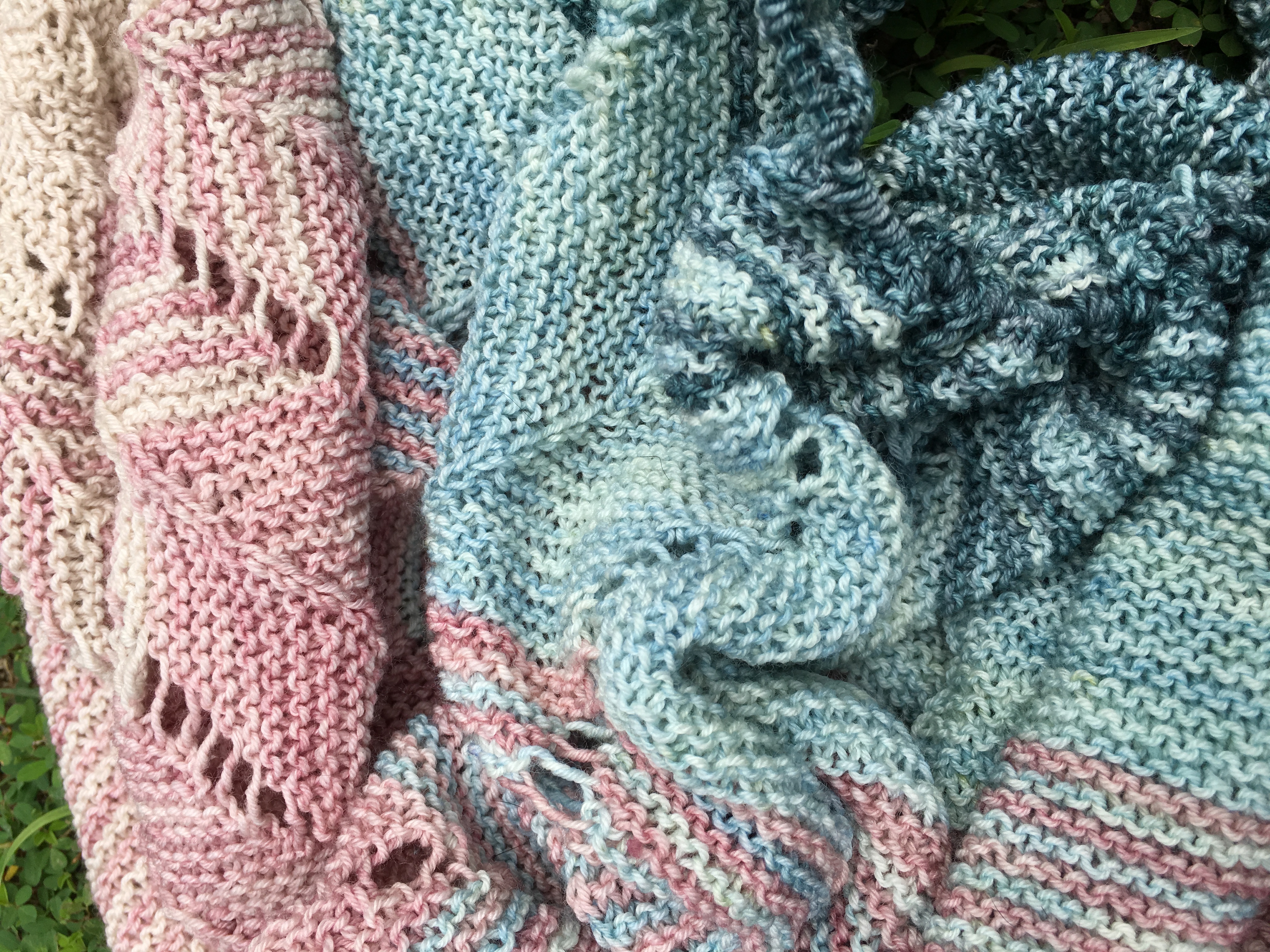 What do you think? Are the flowers turning blue? Right at the centers I think.

One thought on “Extra time to Knit”