When Chuck was looking for work one of the criteria was being closer to family. Right now I’m feeling we won the jackpot in Virgina. We have seen Stevie and Matt more this year than I ever could have hoped. They live less than 3 hours from us and that has afforded trips, for us there and them here, many times already this year. Not to mention it’s doable to co-vacation, such as Myrtle Beach and our upcoming trip to Michigan.

When Hanna decided to come here from Oklahoma and Charlie with Rick from Michigan, Stevie and Matt quickly made time to come, too. Which meant we had all of our kids together for the second time in the last year! Considering this had happened only 3 times in the previous 7 years it is pretty amazing! And I feel very blessed indeed. 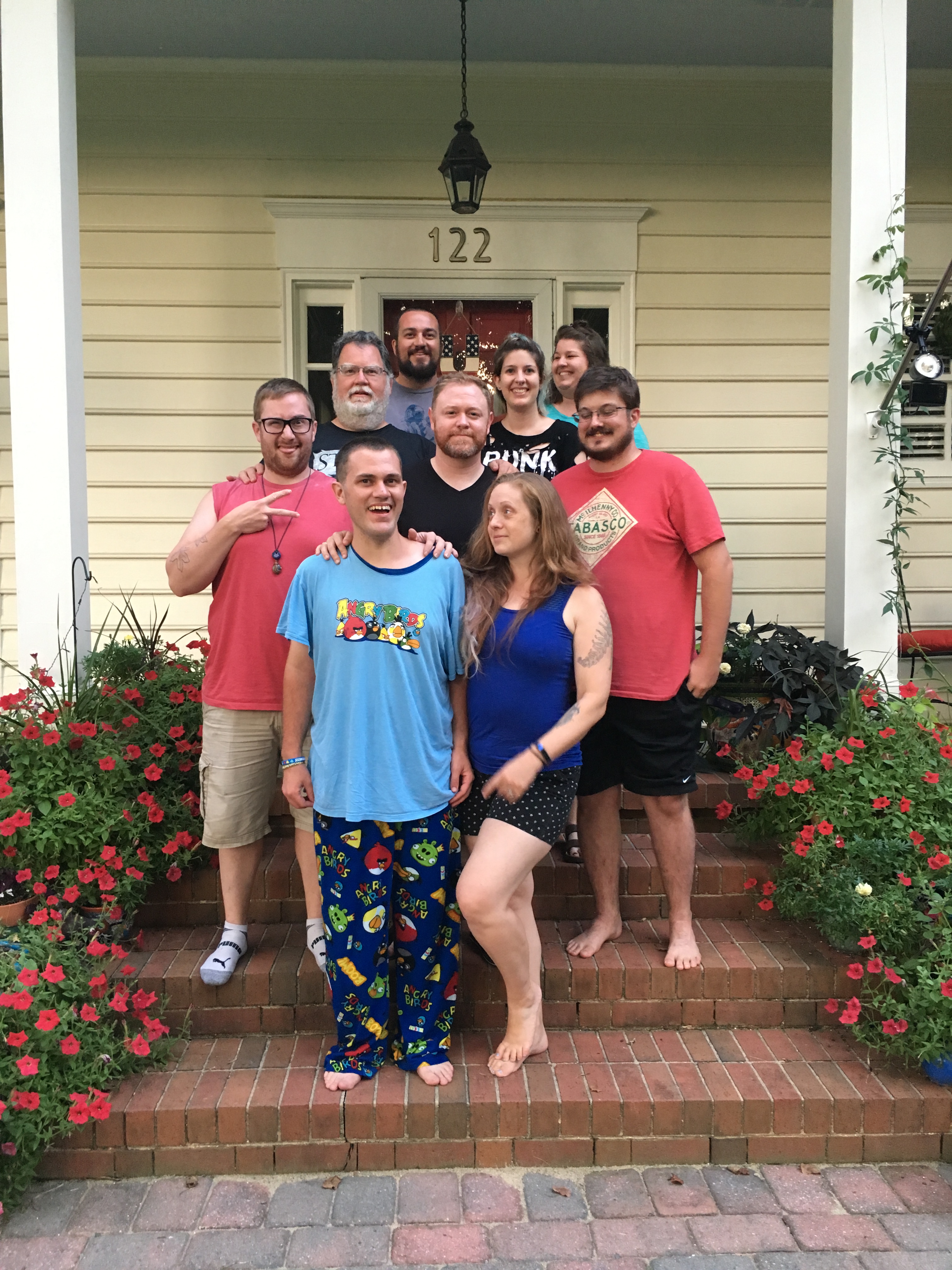 We didn’t do tourist things while the kids were here. The only event we attended was the neighborhood Queen’s Lake Day. Instead we hung out, talking by the fire pit (which Chuck and my brother made this spring) doing basic -I wish I could everyday- relaxing and ate lots of really good home cooked food. There was plenty of bacon and we were treated to an assortment of different biscuits made by Chuck and Matt to go with eggs and sausage gravy, all the biscuits were delicious. 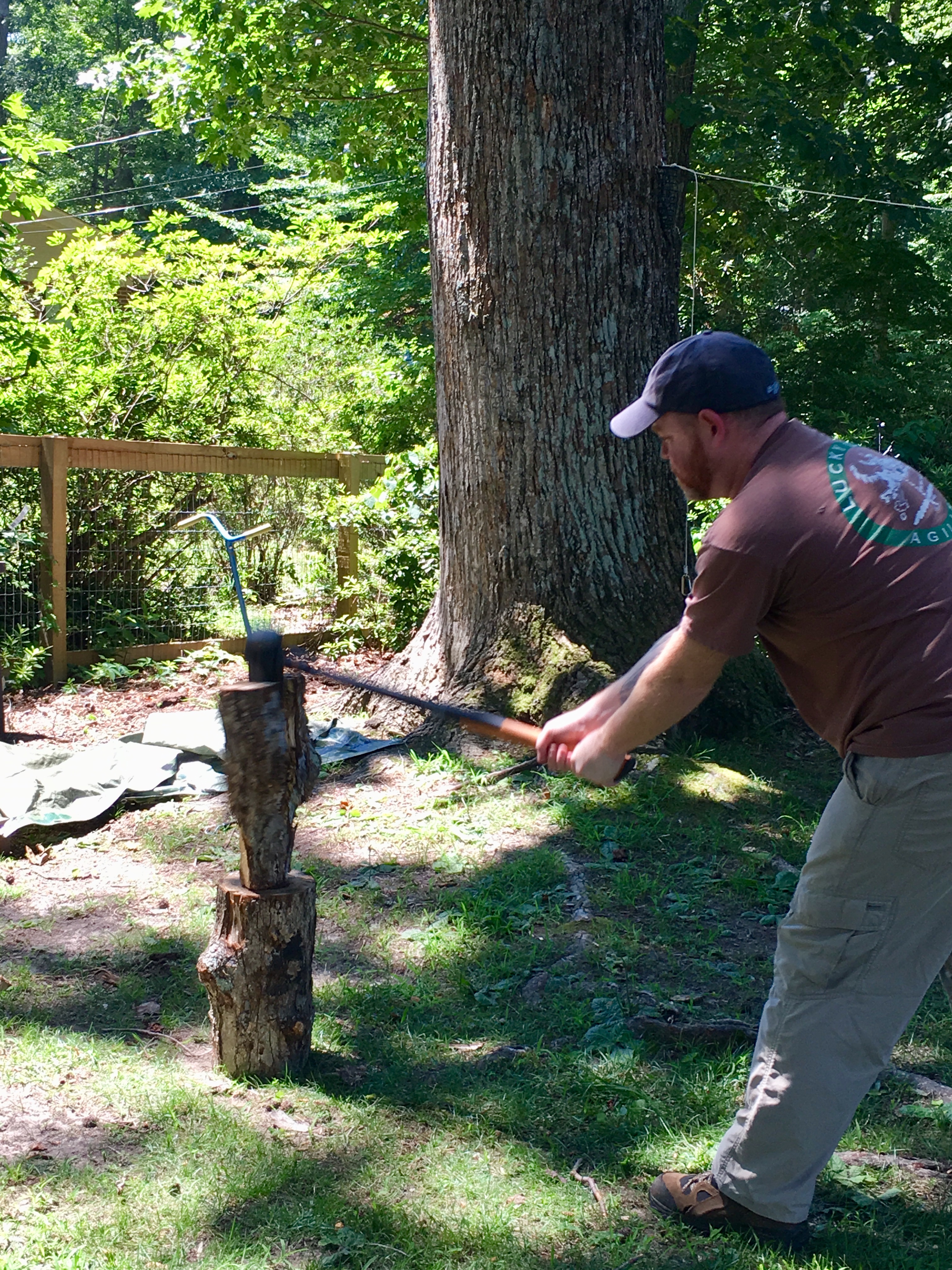 My fantastic son-in-law, Matt, chopped a ton logs into manageable fire wood. He said he loves to chop wood, which I am eternally thankful for. It was quite impressive to watch. And watched he was, by Charlie from the hammock and myself from the comfort of a chair. I feel a little guilty about that, but he insisted, being the gentleman he is. 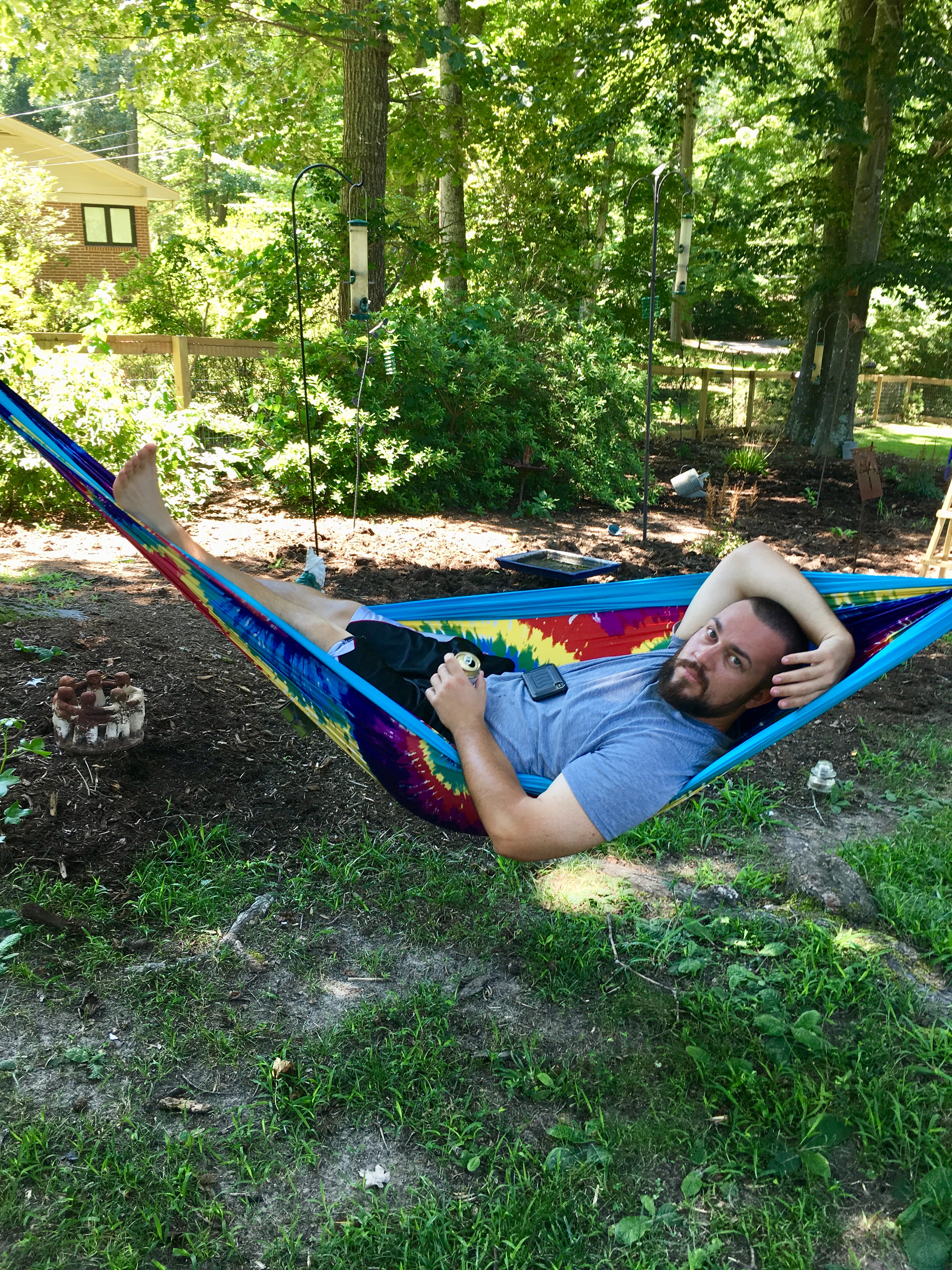 Charlie and Rick moved a “bigly” railroad tie that was far too heavy for just Chuck and Tim to move. Then they replaced it with the top step at the cottage that had rotted out, giving me and my broken foot much safer passage to and from the chicken coop.

The siblings will never be together enough in my lifetime, or theirs for that matter, but I will always treasure these times and I look forward to many more now that we are relatively closer. Who knows, perhaps we can do this every 6 months or so now. Christmas in Virgina has a nice ring to it. What do you guys think? Are you in? We have plenty of firewood for a Christmas morning fire in either or both of our fireplaces! As a side note; I need to take more pictures. I always forget to. I need to work on that. 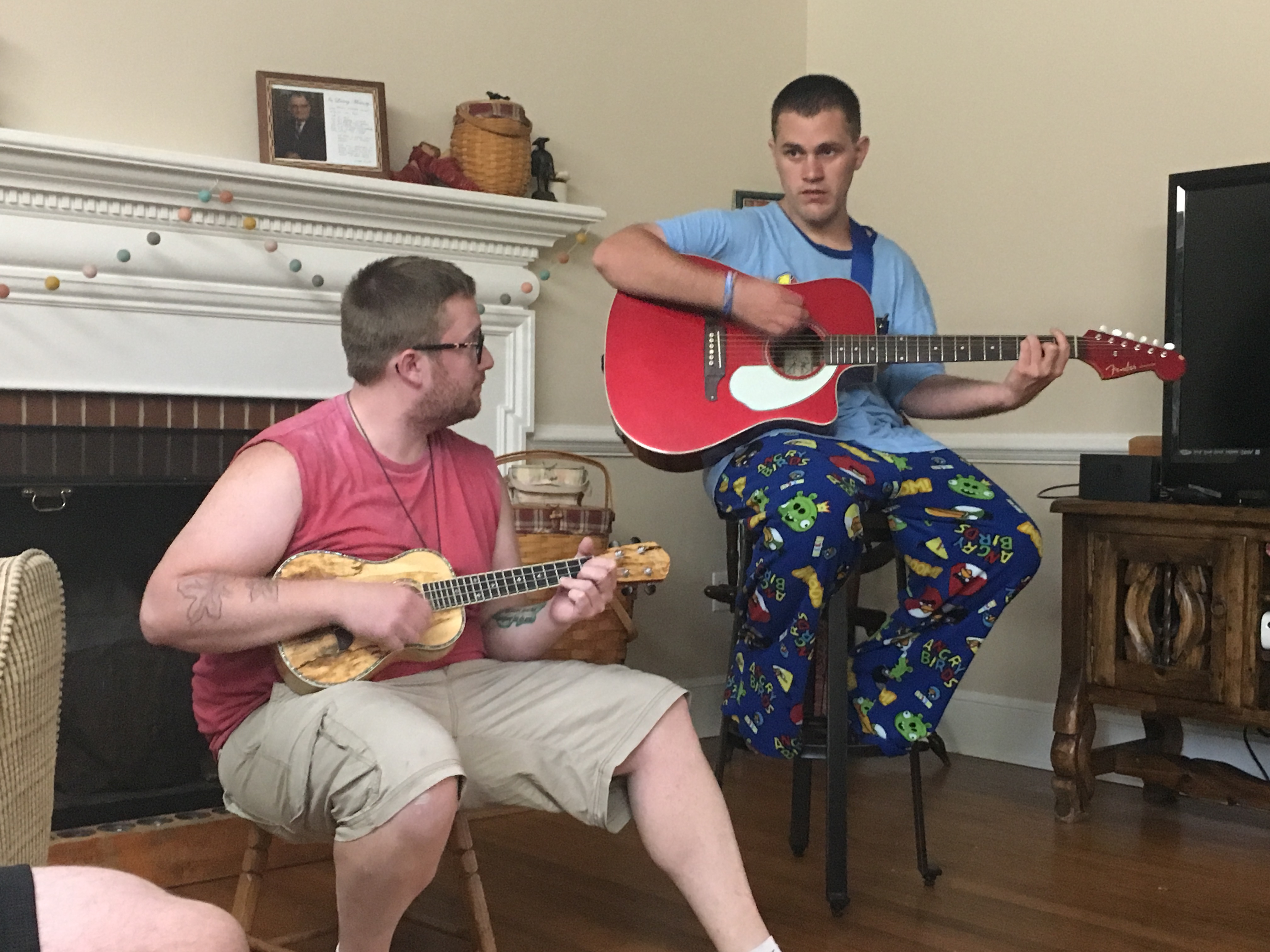 We were treated to an impromptu concert by Rick and his ukulele and Tim and his guitar. Rick has a lovely voice and a passion for playing and encouraged Tim to work as a team, which isn’t always easy for either of them.

We also are very lucky to have had my mom join us the last day the boys were here. We played cards, Hands and Feet, which I haven’t played in forever. I needed the practice as we no doubt will play with my cousins Bill and Linda when we go home tp Michigan in a few weeks. I’m looking forward to that very much.

I’m working on finishing up some knitting projects that have been on the needles far too long so I can start a new longterm project and a new pair of socks. As I have a long car ride to Michigan coming up and I plan to make the most of that time knitting!

Enjoy your family. I know I do.

We live in a neighborhood called Queen’s Lake. It’s a lovely community with different style homes all on large lots. The neighborhood is around a private lake named Queen’s Lake, and bordered by Quaterpath Park, the Colonial Parkway and Queen’s Creek (which isn’t really a creek it’s more of a river.) There are lots of great amenities and activities to be enjoyed daily, but the big event each year is Queen’s Lake Day.

The event is actually kicked off on Friday night with a lighted boat parade on the lake at 9pm Friday. Saturday is filled with a large variety of events. A few are the Triathlon, Water Polo, and scavenger hunt. The morning also has a bicycle parade. Kids and adults decorate their bikes in the them for the event. This year’s theme was West Side Story and was called East/ West Side Story in honor of our two sides of the lake, the streets are E Queens and W Queens. 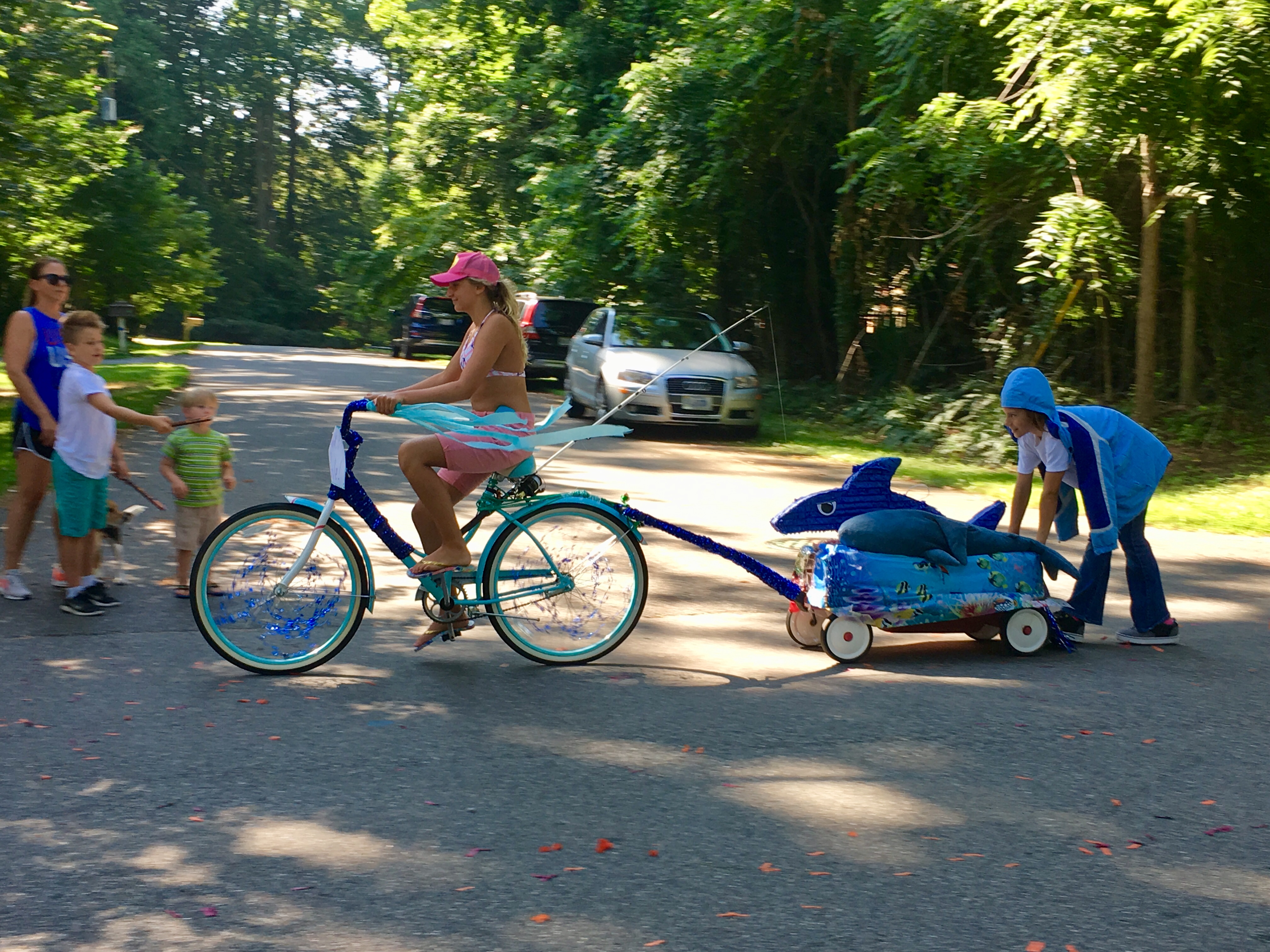 Being new to neighborhood we didn’t know what tp expect. Most the activities took place in the common area where the pools, marina, playgrounds and tennis courts are. I have to say I had no idea how well attended the events would be.  The place was packed! And I love that everyone wished each other a “Happy Queen’s Lake Day.”

There are 3 meals catered and at $10 bucks each it seemed like quite the deal. They also had a beer truck and soda tent all day.  We didn’t take part in all the events but we definitely enjoyed the drinks and the corn-hole tournament the most. Chuck and Charlie made it all the way to the final round, finishing up in second place! Go team. Rick and Matt lowered the levels in the beer supply happily.

Tim really enjoyed the pool more than cron hole. I think my favorite thing was the greased pole. Yes, the greased pole. There is a pole, maybe 25-30 feet high, that has been greased and a token placed at the top. As the day progresses and no-one makes it to the top there is more prize money added, at one point I heard it was $150.  I didn’t take part personally,  but it was entertaining watching all the teenagers problem solve and work as a team to get to the top.  After 3 or 4 hours of watching them they finally made to the top to claim their prize just before I headed home. I was lucky to have seen them make it to the top. 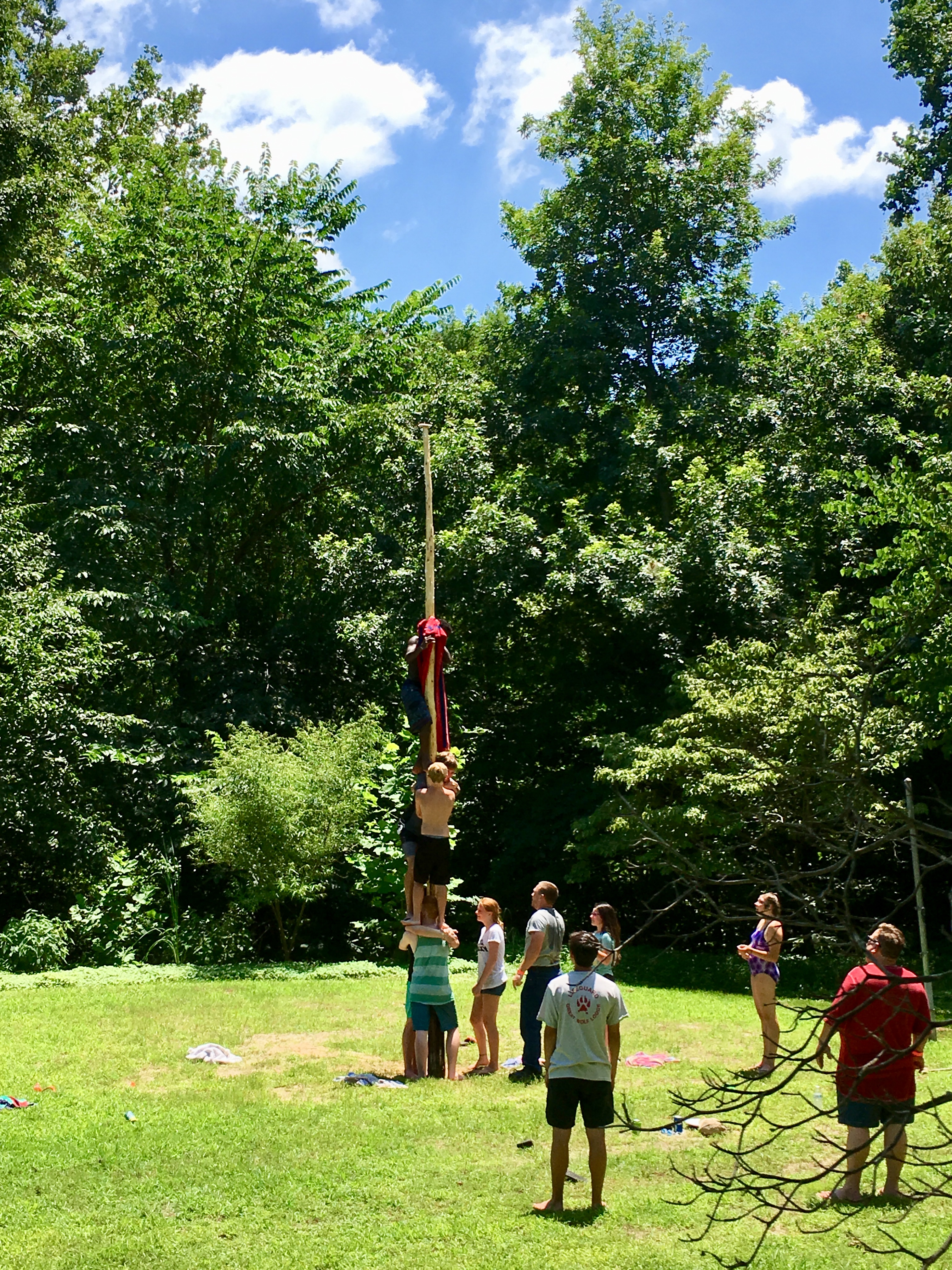 All in all it was a pretty good day and I think my kids enjoyed themselves, too. I’m looking forward to next year!